Apparently the new Will Ferrell and John C. Reilly film isn’t a hit with critics or viewers.

Holmes & Watson is now up to 24 reviews, and thanks to one positive take, it obtained a four percent score.

Vulture’s David Edelstein became the first positive reviewer, of which he is totally aware.

“I should mention that the audience left the theater in a good mood, unaware (it was the 12:55 p.m. show) of Holmes & Watson’s Rotten Tomatoes score, which hovered for a while at 0,” he writes. “I’m happy to bump that up, partly because I cherish the Ferrell-Reilly team, partly because of that musical number. I also worry that we undervalue silliness as we fight the larger fight against ignorance and mendacity in all its manifestations. No brain cells are harmed by Holmes & Watson, just given a few hours to rest and regenerate.”

Edelstein also mentioned in his opening that the film didn’t have an advanced screening for critics, meaning they had to attend with the general public on Christmas Day. This may or may not explain the low number of reviews that have been posted thus far.

Christmas is typically a huge day for movie theaters as many families make the trek to see some of the blockbusters that opened that day. Holdovers Mary Poppins Returns, Aquaman and Bumblebee opened late last week while Vice and Holmes & Watson kicked off Christmas day, all of which looked like a huge day for business.

However, it doesn’t appear Will Ferrell and John C. Reilly’s latest Holmes & Watson was the pick. The comedy is currently sitting at a zero percent rating on Rotten Tomatoes, which is surprisingly rare for the site.

Read more: Band crushes: Where are they now?

The new film reunited Ferrell and Reilly ten years after they won us over in Step Brothers (which currently sits at 55 percent, if you’re curious.) Directed by Etan Cohen (Get Hard, Men In Black 3), Holmes & Watson is a spin on the classic Sherlock Holmes story. The synopsis reads:

“Detective Sherlock Holmes (Ferrell) and Dr. John Watson (Reilly) join forces to investigate a mysterious murder at Buckingham Palace. It seems like an open-and-shut case as all signs point to Professor James Moriarty, the criminal mastermind and longtime nemesis of the crime-solving duo. When new twists and clues begin to emerge, the world’s greatest sleuth and his trusted assistant must now use their legendary wits and ingenious methods to catch the killer before the queen becomes the next victim.”

Holmes & Watson obtained a green splat with their zero percent score, which is currently based upon 17 reviews. 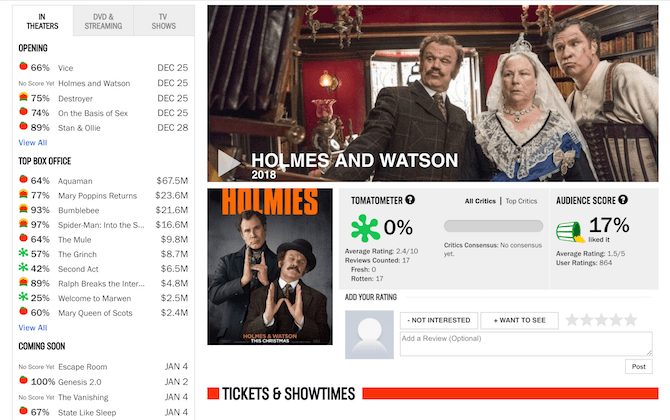 Many of the top critics reviews read similarly across the board:

“The whole thing feels like someone took the unfunny outtakes that might have adorned the end credits and stretched them out into their own film,” RogerEbert.com’s Peter Sobczynski says.

“If you choose to watch this movie, you’ll be treated to an hour and a half of different versions of the same gag: what if [insert modern thing] somehow existed in Victorian times!?” Entertainment Weekly’s Dana Schwartz writes.

The site also allows the audience to review the film, which didn’t help Holmes & Watson out any. Based upon 864 reviews, only 17 percent were positive.

The low ratings make sense as it came in fourth Christmas day with $6.4 million. Aquaman topped the day with $22 million, followed by Mary Poppins Returns with $11.6 million and Bumblebee with $8.9 million.

The Rotten Tomatoes score is referred to as the Tomatometer. According to the site, it’s based on hundreds of film and television critics’ opinions and “a trusted measurement of critical recommendation for millions of fans.”

The site explains that the scale get its name from the classic way of viewers expressing dissatisfaction:

“Back in the days of the open theaters, when a play was particularly atrocious, the audience expressed their dissatisfaction by not only booing and hissing at the stage, but also throwing whatever was at hand–vegetables and fruits included.”

The score is calculated once a film or TV show receives five reviews. The reviews are then translated as either positive or negative by a team of Rotten Tomatoes’ curators.

The reviews can also be taken to the next level of “Certified Fresh.” These films must have a steady score of 75 percent or higher. They must also have a minimum of 80 reviews for wide releases and 40 reviews for limited releases—five of which must be from top critics.

Check out the trailer for Holmes & Watson below.

What do you think of Holmes & Watson’s rotten score? Sound off in the comments below!