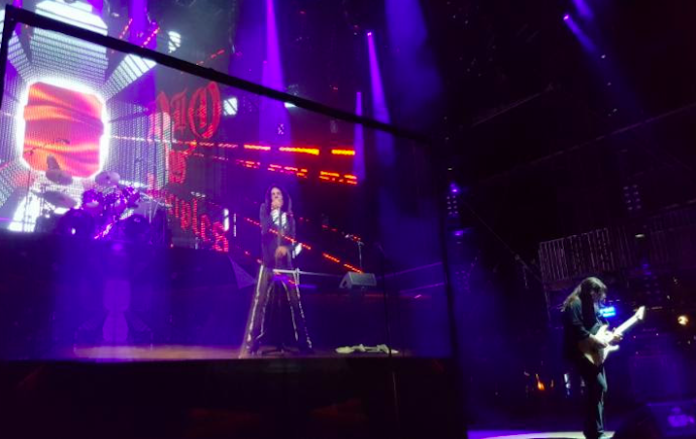 I guess this is what the future of live shows looks like: a hologram performed with a band for the first time at German metal festival Wacken Open Air this weekend.

The late Ronnie James Dio reunited with Dio Disciples at the end of their set—the closer of the festival, which happens to be the world's largest live heavy metal event. Dio Disciples contain members of the band Dio, who last performed with James Dio in 2008 before he passed away two years later.

“When I first experienced the full production of Ronnie performing with his band as a hologram, I couldn't believe my eyes and ears,” says Wendy Dio, who manages Dio Disciples and is also a member of the Eyellusion team, the hologram entertainment company that put on the groundbreaking performance. “With Eyellusion, we have been able to get Ronnie back up on stage where he belongs, ensuring that his music and memory live on. I want Ronnie's fans around the world to share this experience.”

Read more: Op-Ed: Black Sabbath “The End” tour is just the beginning for future of metal

This is the first time a hologram has accompanied by a live band in a traditional concert setting.

“We know how much the fans miss Ronnie and the special and unequaled element that he brought to his live performances,” says Dio Disciples lead guitarist Craig Goldy. “Being able to recreate that same kind of magic for his fans at Wacken was incredible. For so many years Ronnie always invested big in his live shows as his way to give back to the fans, and that is exactly what we aimed to do with this latest performance. We can't wait to bring this experience to even more of his fans and perhaps even a newer generation when we bring this incredible live experience on the road next year.”

Watch more: “People can tell how not cool you are more easily.”—Taking Back Sunday talk technological advances