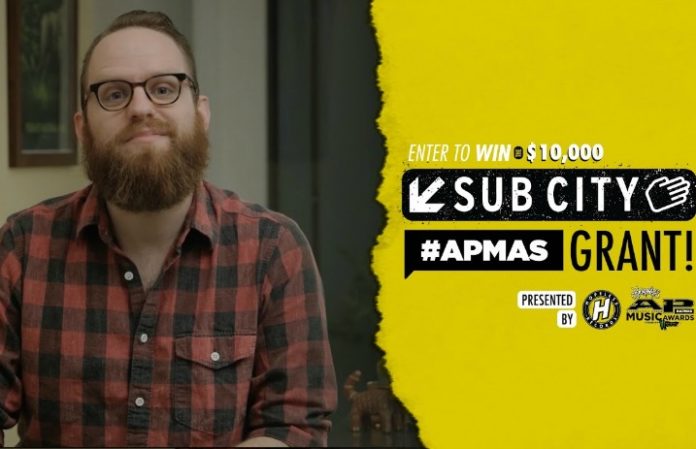 The APMAs are teaming up with Hopeless Records' Sub City for a special $10,000 grant program. The Wonder Years frontman Dan “Soupy” Campbell is the Sub City grant's ambassador and explains the initiative in the video below!

Here's how it works. Figure out a way to get involved with your community (that's related to music in some way), such as starting an after-school music program to benefit at-risk kids or organizing a concert to raise money for clean water initiatives. Don't worry if you don't know how to make your idea happen—Sub City can pair you with a nonprofit that needs your help.

You have until June 15 to submit your awesome idea to hopelessrecords.com/subcitygrant.

“On tour recently, we’ve been talking with a lot of people who feel depressed and defeated by the state of the world,” says Campbell. “Now more than ever, it feels like we need to lean on each other. The world needs the positive impact that you’re capable of creating. Your passion can be education, the environment, inclusivity, ending world hunger, access to clean water, helping animals, giving kids a place to go after school. It’s almost limitless.”

A panel of industry partners and charity organizers will review the submissions. The winner will be announced at the APMAs!

“We are thrilled to be teaming up with Soupy from the Wonder Years and Alternative Press to award this first grant,” says Louis Posen, president of Hopeless Records/Sub City. “This is our way to say, ‘Here is money so you can take your great idea and take action to make the world a better place.’ We recognize there are a lot of smart fans and bands with amazing ideas that are only missing funding to get off the ground or to get to the next level.”

The 2017 Alternative Press Music Awards will take place July 17 at the Quicken Loans Arena in Cleveland. See the first wave of performers here, see the full list of nominees here and vote for your favorites before June 30.