Here’s how to enable “Dark Mode” on Facebook Messenger

If you’ve been on Facebook lately you might have noticed a few people talking about the new “Dark Mode” on Facebook Messenger. While rumor of the long-awaited Dark Mode has been circulating for a while now, it seems that Facebook may finally be testing the new feature.

However, Dark Mode is not listed as a default setting in Messenger, meaning if you want a Messenger as dark as your little emo heart then you’re going to have to activate it using this hidden method.

Read more: Shaggy reacts to not getting cast in upcoming ‘Scooby-Doo’ movie

Reddit user FusionxGamerz spotted the hidden method of enabling what I like to refer to as “Emo Mode”, sharing it with users on the forum.

Luckily, it’s a pretty easy method of activating the aesthetically-pleasing mode. Unfortunately, it seems that (in typical Facebook testing fashion) not everyone will be able to enable this feature as it’s currently being testing.

But there’s no way of knowing unless you try, right?

I attempted the following steps from my iPhone, confirming that the steps do indeed work – if Facebook has activated the feature for your account.

Here’s how to enable Emo Mode:

1. Open up Messenger and send a moon emoji

IMPORTANT: it CANNOT be the moon emoji with the face – it must be the left-facing, crescent moon emoji. Send it to a friend, yourself, or even one of those annoying Facebook bots. I sent it to myself and it worked like a charm. 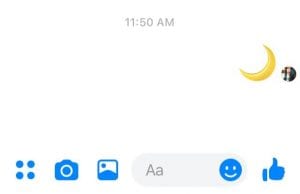 Some say you’ll need to tap the moon emoji in order to enable access to Dark Mode, but mine automatically popped up after I sent the emoji. Either way, after being showered with a bunch of animated moons, you should receive a “You found Dark Mode!” message at the top of your screen with the option to “Try It in settings”.

Tap “Try It in settings” and it should bring you to your Messenger profile. Just under your name you should see the option to turn on Dark Mode.

*Note: some users have had to exit then re-enter Messenger in order for Dark Mode to kick on.

Keep in mind that if this method does NOT work, Facebook may have not rolled out the feature to your account yet.

If it did work – congrats! We hope you enjoy your new emo mode!

Have you found any other methods for enabling Dark Mode? Do you prefer this version over the original Messenger? Sound off in the comments below!