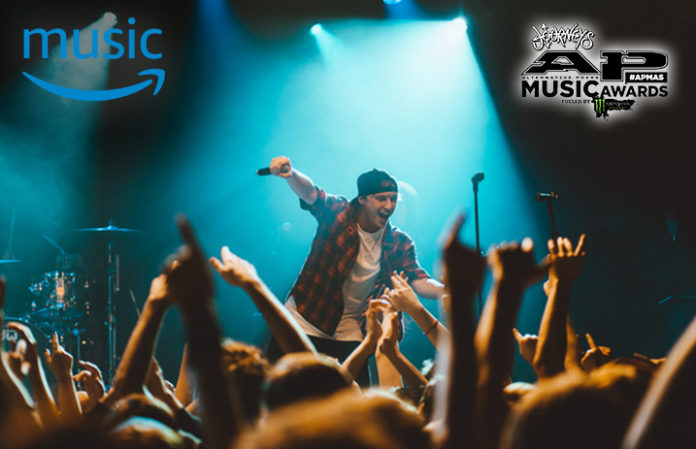 With the big night tonight, the 2017 Journeys Alternative Press Music Awards, fueled by Monster, are pleased to announce that fans will once again be able to watch the show live from anywhere in the world! The APMAs will broadcast live from Cleveland’s iconic State Theatre starting at 7 p.m. ET/4 p.m. PT on Monday, July 17.

Read more: Emo Nite LA after party and other 2017 APMAs events to attend

This year the APMAs will once again team up with Amazon Music for the exclusive live stream of the show, allowing fans to watch in real time. The APMAs will be available on Amazon Music's website on mobile phones, Macs and PCs, as well as globally on Amazon Music’s official Twitch channel via all devices where the Twitch app is available including the Amazon Fire TV and Fire tablets, PlayStation 4, Xbox One, Xbox 360, Chromecast, Fire TV and Nvidia Shield.

Before the main event, the red carpet (brought to you by Journeys and PRS Guitars) will stream live on Alternative Press’ Facebook from outside the State Theatre starting at 3:30 p.m. ET. Radio personality and host of Idobi Radio’s The Gunz Show Mike “Gunz” Gunzelman and New Years Day’s commanding frontwoman Ash Costello will be your hosts.

Read more: 2017 APMAs FAQ: All your burning questions about the show answered

XI Media Productions— named one of the Top 50 Creatives/Technologists for 2016 by Studio Daily and winner of over a dozen Telly and DV Video Awards— will film this year’s production. XI have produced live streams watched by millions of music fans all over the country for Pitchfork, Rolling Stone, NPR, Vans, Dell, Matador, Merge, Atlantic, Vevo and more.

“The APMAs serve the artists and fans that celebrate living life at full tilt and not making sacrifices in order to produce the art that they want to make and hear,” says Founder of XI Media Productions Dusty Kraatz. “XI Media have always approached producing live music content in the same way. We have survived this long in the industry by always taking the punk-rock approach and doing things our own way. In that respect, partnering with AP to produce this year's APMAs is a perfect fit and feels like the culmination of everything we have done to this point.

“Our goal this year is to allow the intensity and raw energy that is the spirit of the APMAs to really shine by producing an award show that isn't quietly sitting back and observing from a distance. We are making sure our viewing audience is looking at their host Andy Biersack, and the rest of this year's amazing lineup of artists, right in the face with an unflinching gaze. It’s our goal to make you feel every bit of blood, sweat and fun as it unfolds on the stage.”

Read more: QUIZ: Which 2017 APMAs Artist of the Year nominee are you?

Watch the APMAs website for final details about this year’s show.