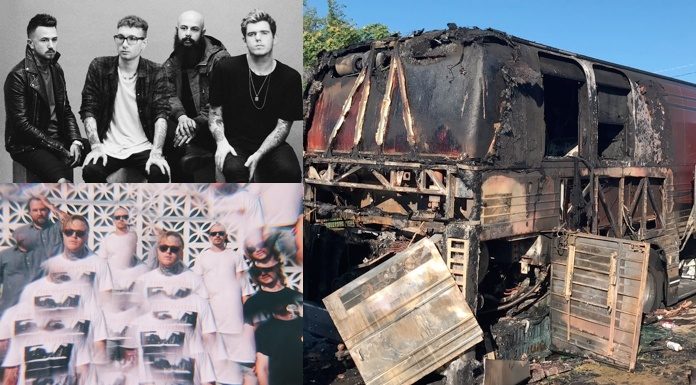 Hundredth and Being As An Ocean have taken to social media this morning to confirm that both bands are fine after their shared tour bus caught on fire this morning.

“Woke up this morning to our bus on fire. We all got out and are okay,” Hundredth shared on their Twitter this morning.

Being As An Ocean’s Anthony Ghazel shared a similar message:

Both bands are currently out on Warped Tour all summer long, and both bands and fans in the scene have reached out to show their support.

Yo, heavy prayers going out to @beingasanocean @HUNDREDTH. It’s so hard to make a traveling bus your home for months on end, but to have to

go through something like this is just tragic and we are feeling for you boys hard. So glad you guys are alive!!! @HUNDREDTH @beingasanocean

Guys this is just chilling and so sad, as soon as their is a support funding going on we will let everyone know. @beingasanocean @HUNDREDTH pic.twitter.com/JIp8Sfe9hc

Woke up to videos and pics of @HUNDREDTH & @beingasanocean‘s bus burning to the ground. Glad they’re not dead.

Sending out love to @beingasanocean and @HUNDREDTH. Glad you’re all right. Go buy some merch to help support them!

At the time this was written, neither band have launched a GoFundMe or other type of fund for support, but we will keep you updated if this changes.

Hundredth have tweeted that they will not be launching a GoFundMe following this morning’s fire aboard their shared tour bus with Being As An Ocean. See the band’s latest tweets concerning the bus fire directly below.

Hundredth state online that, “We are all alive and it’s just stuff,” while thanking “all who reached out today with good vibes.”

Thank you to all who reached out today with good vibes. There will be no GoFundMe or anything. We are all alive & it’s just “stuff” ⚡

The band ask those looking to contribute in some way to “come bob your head” at the band’s shows this summer on Warped.

We are finishing the tour. We are still jamming these new songs. If you wanna do something, come bob your head ⚡

Being As An Ocean have yet to announce any crowdfunding campaign following the fire. They did recently tweet a request for an older model iPhone, presumably to replace one lost in the blaze.

If you have an old iPhone or other phone in ATL / Orlando that you don’t use anymore that we could rock, reply to this!

Both bands are apparently moving forward with their scheduled dates on the 2017 Warped Tour. You can also support Hundredth and Being As An Ocean by buying their merchandise online via their respective official merch sites:

• Being As An Ocean have lots of cool merch available at their MerchNow page: merchnow.com/catalogs/being-as-an-ocean.