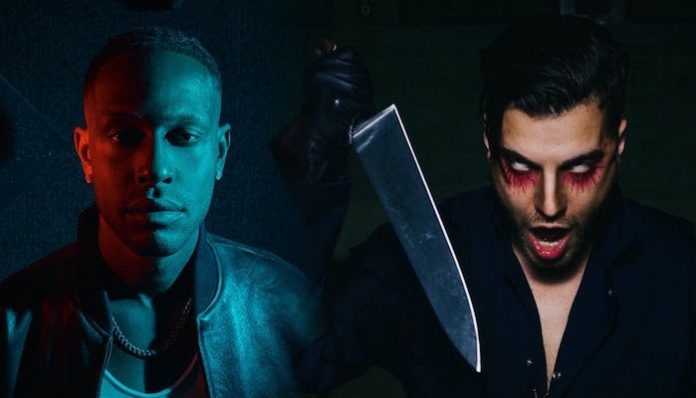 Hyro The Hero is back with yet another new song for fans. This time around, however, he is joined by Ice Nine Kills‘ Spencer Charnas.

Together, the duo has teamed up for the intense new collaboration “Retaliation Generation.”

Throughout 2020, Hyro The Hero treated listeners to some massive collaborations. Back in September, he joined forces with Disturbed‘s David Draiman for the collab “We Believe.” Then, in December, he dropped an entertaining music video for his massive song with Hellyeah‘s Chad Gray called “Fight.”

Now, Hyro The Hero is back with yet another collaboration. On Friday, he unleashed his intense new song “Retaliation Generation” which features Ice Nine Kills vocalist Spencer Charnas. Together, they worked with producer Matt Good (Asking Alexandria, Hollywood Undead) to bring the song to life.

For Hyro The Hero, this latest collab encompasses the style of music he has crafted over the years. As well, he wants “Retaliation Generation” to inspire listeners to speak up for what they believe in.

“‘Retaliation Generation’ is a great song that represents the style of music I have come to be known for,” Hyro says. “Having Spencer sing the hook and Matt Good on production blasted this track into ‘anthem’ territory. I think this song captures the emotion of what this generation feels in this crazy time we are living in. It’s full-on attack mode right from the beginning it’s such a great feeling when an artist like Spencer helps take a song like this to the next level. I want anybody who listens to this song to be a voice. Stand up for what you believe in.”

Charnas also says that “Retaliation Generation” represents what a lot of people are feeling these days. From holding others accountable to not letting obstacles stop you from doing what you know is right, this new collab is a snapshot of what this current generation is going through.

“I think with everything going on in the last several years, our generation is holding people accountable,” Charnas says. “It’s a movement in terms of a ‘you ain’t getting away with this shit anymore.’ It’s a battle cry. I think it’s got such a cool overall message of not letting trials and tribulations of the world get you down. I think people can be their own worst enemy, and this is a song of empowerment. You can fight for what you believe in. It’s up to you to put up or shut up.”

“Retaliation Generation” is just another preview of what’s to come from Hyro The Hero this year. After touring nonstop on his last album, he hit the studio with Matt Good where they recorded an entire album in just two weeks. During that time, Hyro The Hero found himself expanding his sound in ways he never has before.

“You can see and hear the growth in this album,” he says. “I had to go through everything that brought me to this point and I’ve really learned how to focus on storylines and approach records structurally and lyrically. All of my experience built up respect to work with some of my heroes on the new material. I want to have my name in this game for a lifetime.”

Last month, Hyro The Hero and Draiman exclusively talked to Alternative Press about their collab “We Believe.” As it turns out, the overall vibe and message of the collab is something fans can expect to hear on Hyro the Hero’s upcoming album. As well, he has plenty of other collaborations in store this year.

What are your reactions to Hyro The Hero’s new song with Ice Nine Kills’ Spencer Charnas? Is it your favorite collab from him so far? Let us know in the comments below.