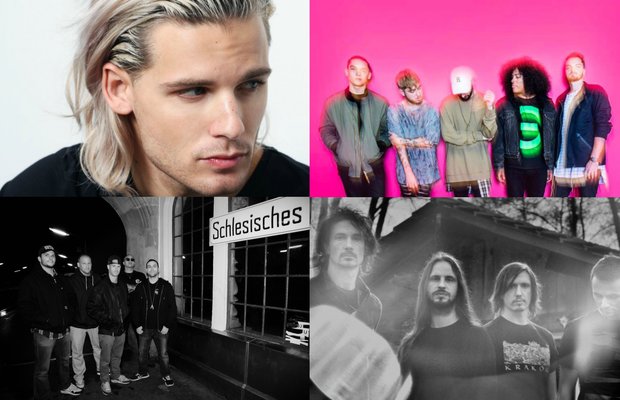 Read More: Acceptance release new single, and other news you might have missed today

1. Gojira and Opeth will tour the United States together next May

Fresh off receiving their two Grammy nominations earlier today, French metal act Gojira officially announced their upcoming 2017 U.S. tour with Opeth. You can check out the full list of dates below, which include solo festival stops at Welcome To Rockville and Rock On The Range for Gojira on the first and last dates.

This Spring we are excited to announce some US dates with our friends @OfficialOpeth! Tickets on sale this Friday, 10am local time. pic.twitter.com/OzZtgN6ymq

2. Terror sign to Pure Noise Records AND will release a new EP in 2017

The L.A. hardcore outfit is switching labels after 10 years with Century Media and Victory. The lot seem happy to unite with a southern California-based label, which features fellow hardcore acts such as Stick To Your Guns, Counterparts, and Knocked Loose. The band has posted the following statement regarding their transition:

“After a great run of releasing records with Century Media and Victory for the last 10 years, it's exciting to find a fresh, new home for Terror,” says vocalist Scott Vogel. “We are humbled to still be a band with a lot of love and support around the world, and Pure Noise Records is exactly who we wanted to work with for our future. We look forward to the next chapter in this wild ride and couldn't be happier to be doing it together with Jake (Founder of Pure Noise Records).”

Terror also plans to release their first material on the label in the form of an EP, which will be due out some time next year.

3. Issues have released a brand new video for their song “Slow Me Down”

Today’s premiere marks the fourth production put out by the group in support of their album Headspace. You can check out the music video below, which was done by Samuel Halleen.

Debuting their latest video from their album Treehouse on Billboard earlier, “Calm Snow” features enchanting visuals that tell a love story within a mystical forest. The video was produced by Sam Malko, and directed by Jensen Noel.

“The story takes place in the mind's subconscious; a place where your desires and fears crash at high speeds,” frontman Devin Oliver tells Billboard. “Where your perceptions of reality are the very plane you walk on. In dreams, fate is an illusion. Destiny is what happens when you awake.”

5. After The Burial officially enlist Adrian Oropeza as their permanent bassist

Since he’s been touring with the band for the past year, Oropeza finally won over the Minneapolis natives and is officially a member of After The Burial. He replaces Lerichard Foral, who owned the previous spot.  The band’s official statement regarding the announcement can be read below.

“ANNOUNCEMENT! If you’ve seen us in the past year, you may have noticed a new guy holding down the low end on stage. We’d like to officially welcome Adrian Oropeza to After The Burial.

If you’ve ever had the chance to talk to Adrian, you’d know that he is one of the most chill people you’ve ever met. He’s a great player, and his hard work ethic and positive attitude are values that we’ve carried since day one of ATB.

Everyone give him a warm welcome, and congratulations!!”

6. Mogwai are bringing their Atomic tour to the United States

The Scottish post-rock group has been traveling Europe and Asia in support of their latest release, Atomic, which is a reworked film score to the BBC’s 2015 atomic bomb documentary, Storyville – Atomic: Living in Dread and Promise. Even cooler is that the band performed live alongside some of these screenings, including a show at Hiroshima. Now the band is bringing their tour to the United States, with tour stops in some main North American cities.

“The Atomic soundtrack is one of the most intense and fulfilling projects we’ve taken on as a band,” guitarist and vocalist Stuart Braithwaite said. “Ever since we went to Hiroshima to play and visited the peace park this has been a subject very close to us. The end results, both the film score and the record are pieces I’m extremely proud of.” Check out the full list of dates below!

7. A Loss For Words released their second single from Crises

The Boston-based act put out a video for their new song titled “I Feel An Army In My Fist.” The song also features Andrew Neufeld of Comeback Kid. A Loss For Words encourage you to blast it! Their new album Crises will be available December 27. Have a listen below!

Here's single #2 off of Crises, “I Feel An Army In My Fist” featuring Andrew of Comeback Kid. It's angry, blast it. https://t.co/5XGnIWWv3Y pic.twitter.com/B9e5MWyobZ

According to Britain’s Entertainment Retailers Association (ERA), last week there was more money spent on records for the first time ever, as £2.4 million was spent on vinyl, as opposed to the £2.1 million that covered digital downloads. As The Vinyl Factory reports, this is a staggering increase from the £1.2 million in sales that vinyl did at this time last year, where downloads of digital albums were sailing at £4.4 million just a year ago. The uptick in sales is being attributed to the increase in retailers and number of promotions going on during the holiday season, where of course many of us are receiving vinyl as gifts.