Ice Nine Kills frontman Spencer Charnas is a serious horror movie obsessive. The singer fell in love with fright movies at an early age. Over the years, he’s become well-versed in the classics and the deep cuts alike. As a result, INK draws major influences from the genre. The band is immersed in the gruesome and the gory, creating a cinematic atmosphere in their videos and concerts. In fact, the line between the metalcore act and the horror genre is sometimes so thin, it’s kind of spooky.

Well, it looks like things are about to get even scarier. The band is moving into a new realm: comic books.

Read more: 10 bands who led the very grisly idea of goth-punk across history

In an Alternative Press exclusive, Ice Nine Kills offers a first look at their new graphic novel, Inked In Blood. Z2 Comics also shared five pages from the upcoming horror story, and you can only see them here.

Inked In Blood sees Charnas cast in a terrifying nightmare of the band’s own creation. The story was written by the group in partnership with Steve Foxe, creator of Razorblades: The Horror Magazine. The graphic novel will feature art by Giorgia Sposito, a contributor to Titan Comics’ Doctor Who series. It will also include material from Andres Esparza, who has worked on Helsing, Heavy Metal and John Carpenter’s Tales Of Science Fiction. Additionally, the graphic novel features art by Phillip Sevy, known for Triage, Tomb Raider and Paradox.

The graphic novel functions as an expansion of the universe created by the band’s 2018 album, The Silver Scream. In the story, Ice Nine Kills bandleader Charnas is put on trial for a series of gruesome crimes. When one of the band’s bullied teen superfans refuses to accept the official story, she lands herself in hot water. Ultimately, the character navigates a life-or-death struggle against a frightening copycat killer.

Charnas notes that comics are the natural progression for the band. “The world of comics has always gone hand and hand with the horror genre I’m obsessed with, so to be creating our own work with the talented people at Z2 is incredible,” he says.

Charnas also gave Alternative Press an exclusive insight into how the graphic novel fits with the band’s approach to storytelling.

“Inked In Blood marks Ice Nine Kills’ entrance into the world of graphic novels, a medium which has always been near and dear to me as a horror enthusiast,” Charnas says. “This graphic novel introduces the next chapter for the band, bringing together an infamous frontman, a die-hard fan and a mysterious killer. An extension of the band’s story, this graphic novel also focuses on the most integral part of Ice Nine Kills: the Psychos. Our Psychos play a key role in bringing The Silver Scream to life, and Inked In Blood perfectly captures that.”

Read more: Metallica turn the US national anthem into the ultimate guitar shred—watch

Z2 Comics is known for deep connections to the music world, including collaborations with BABYMETAL, YUNGBLUD, Andy Biersack and Poppy. Naturally when it came time for Ice Nine Kills to partner with a brand, Z2 Comics was the obvious choice.

Z2 publisher Josh Frankel says the band are a great fit for their catalog.

“Ice Nine Kills are the perfect band for comics, and their last album inspires all the visuals you could want for four-color horror,” Frankel says. “Inked In Blood has all of the feel of your favorite classic horror flicks. There are no tricks in announcing this Halloween treat for horror and music fans alike.”

Inked In Blood is available in standard softcover edition May 12. There is also a hardcover and limited deluxe edition available directly from the Z2 website. The deluxe slipcase edition features an exclusive vinyl colorway of the band’s 2018 album, The Silver Scream.

Check out an exclusive preview of Inked In Blood below. 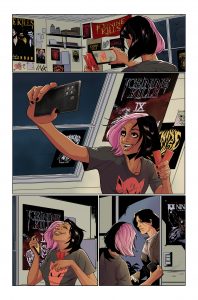 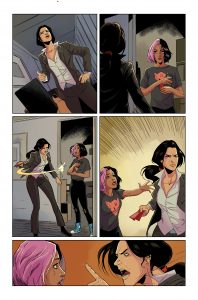 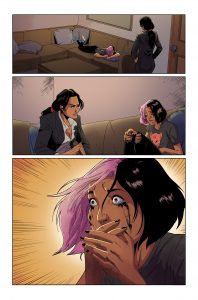 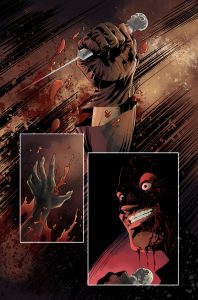 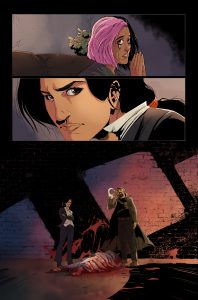 Ice Nine Kills formed in 2000 in Boston. The band built a name for themselves over the course of a decade. They toured relentlessly with a number of major rock acts, including Paramore, Thursday, As I Lay Dying and Every Time I Die. They were also regulars on the Warped Tour.

The group’s earlier work drew widely from alternative rock, showcasing the sounds of pop punk, emo and ska. This early sound is particularly evident on their 2006 self-released debut album, Last Chance To Make Amends, and their 2007 EP, The Burning.

Starting with their 2010 album, Safe Is Just A Shadow, the group established a more definitive metalcore sound. This style remained prominent in their later releases, especially defining their 2015 Fearless Records debut, Every Trick In The Book.

From their earliest moments, Ice Nine Kills have showcased their love of scary movies and horror. The band’s 2018 release, The Silver Scream, is the ultimate love letter to horror, paying homage to classics of the genre. The band regularly recreates iconic horror ensembles onstage, borrowing the look of Freddy Krueger, Leatherface, Jason Voorhees and more.

INK dropped an It–influenced video for “It Is The End” featuring JR Wasilewski and Buddy Schaub of Less Than Jake. In 2019, the group released an extended edition of their record, The Silver Scream: Final Cut. That version introduced a number of new tracks, including “Your Number’s Up,” complete with a video paying tribute to Scream.

Ice Nine Kills have been busy in 2021. Spencer Charnas teamed up with Hyro The Hero for “Retaliation Generation.” Ice Nine Kills also released a video for their Valentine’s Day rendition of Elvis’ classic “Can’t Help Falling In Love.”

In a 2020 interview with Alternative Press, Charnas explained why he saw a perfect connection between horror and hard rock.

“I think that the bridge is really that they’re just naturally subcultures,” he says. “They appeal to both metal and punk. These extreme films that are gory can really test what someone can handle psychologically. It’s just that natural community. These filmmakers who are making this dark, gritty, maybe even tongue-in-cheek thing. They get it. They’re the cool cats. And I think because of that, those subcultures will always be married.”

“And to me, heavy music or any kind of music—even like Bernard Herrmann, who did the Psycho score—it’s intense, whether that’s classical-sounding music or orchestral,” Charnas continues. “But it gives you that hard-hitting feeling you can’t deny. And that’s what horror does. I think that maybe in the brain chemistry, those two things are very closely interrelated.”