Last week, we learned that Iced Earth guitarist Jon Schaffer is wanted by the FBI for his involvement in the U.S. Capitol riots. After Schaffer was identified, Iced Earth released a joint statement denouncing the Capitol riots.

However, an old post from lead singer Stu Block has many believing he feels differently about the events that transpired. Now, Block is clarifying his stance on what happened last Wednesday.

Since last Wednesday’s events transpired, a lot has happened. To start, Donald Trump’s Twitter account was temporarily locked before being permanently suspended. As well, Dead Kennedys faced backlash within the punk community after praising Mitt Romney on Twitter. Shortly after, however, the band confessed they had nothing to do with the tweet that was shared.

During the U.S. Capitol riots last week, hundreds of photos and videos were taken. As a result, metal music fans quickly identified Jon Schaffer as one of the individuals who breached the Capitol building.

So this guy is the guitarist of Iced Earth, a 80s thrash metal band. Let’s make him Twitter famous.
His name is Jon Schaffer. pic.twitter.com/DDZOCJuLpo

Just in case you wanted to know, and like, not give a shit about the band anymore pic.twitter.com/21Vr2yC3nX

Then, on Jan. 8, we learned that Schaffer is officially wanted by the FBI for his involvement in the events. After this news broke, Iced Earth released a statement denouncing the riots and Schaffer’s involvement. The statement was released via Luke Appleton’s Instagram page.

“We want to thank those of you who have sent words of support in recent days,” the statement says. “Some of you have been concerned by our silence, which we understand. We needed some time to properly process the information and find out some facts before we made a statement.

We absolutely DO NOT condone nor do we support riots or the acts of violence that the rioters were involved in on January 6th at the US Capitol building. [We] hope that all those involved that day are brought to justice to be investigated and answer for their actions.

With broken hearts we are sending our love and compassion to everyone who has felt pain from the events on January 6th. We are deeply saddened and our hearts go out to the families of the lives lost that day. There are really no proper words to console. Just know we are with you in your shock, grief and pain. Much love to you all. Stu, Luke, Jake, Brent”

However, an old post from Stu Block has many believing the singer was actually supportive of the riots. A now-deleted Facebook post has been floating around the internet that shows Block seemingly supporting the riots.

“Oh it’s happening. History in the making. Sending love to my friends and in the US and all over the world!”

One commenter asked the vocalist if he was “condemning” what happened. However, Block responded with, “Where in my statement would you get that impression?” 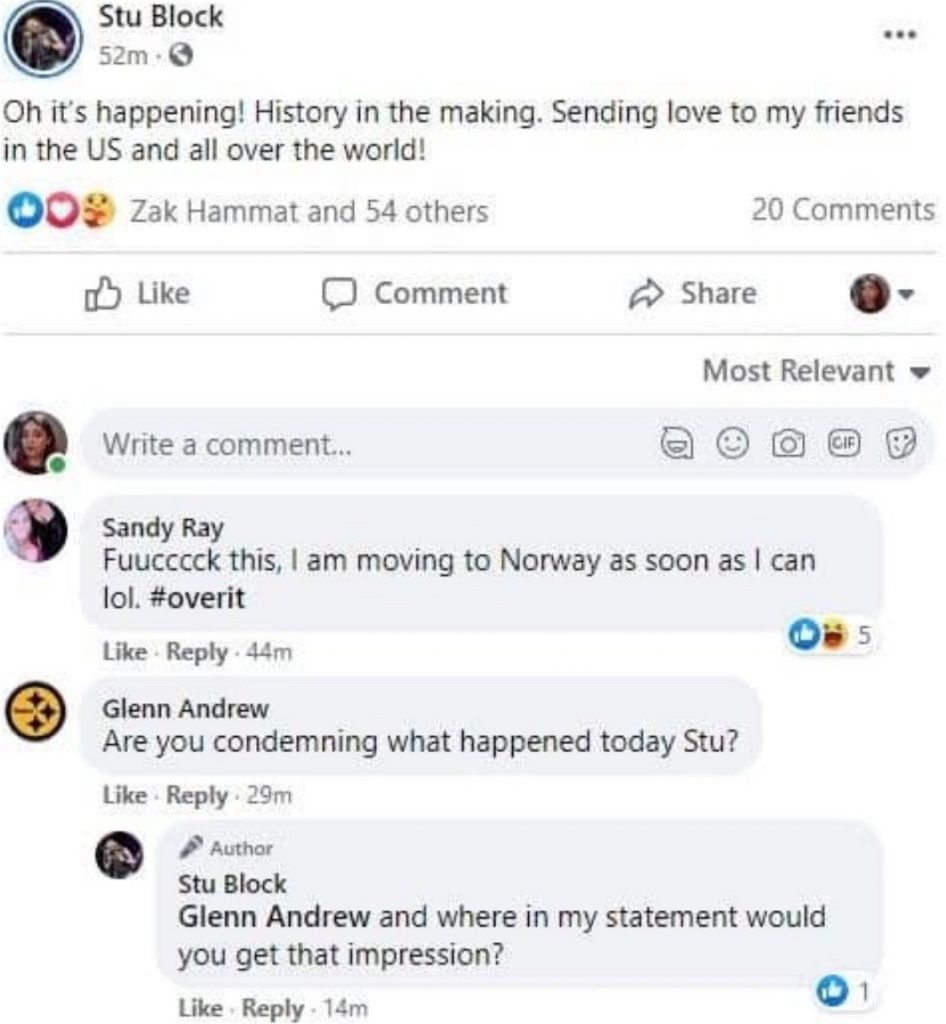 Now, it looks like Block is trying to clarify what the post actually meant. On Monday, he shared a lengthy statement apologizing for the now-deleted post. According to him, the wording of the post was misunderstood and he does not condone what happened last week.

Read more: This TikTok challenge is bringing back David Bowie’s most iconic looks

“First I want to thank everyone for the amazing support you have shown,” Block says. “Unfortunately, it has come to my attention in recent days about a screenshot someone made. There were some very obsessive hateful people posting the screenshot that I did have to remove from my social media. I do want to extend my apologies for the poor way I worded two Facebook posts on January the 6th. I’m human and I make mistakes. My wording was absolutely misunderstood and not properly thought out on my part and I know people and media can interpret things differently.

At that moment I saw a historical thing happening that perhaps would cause divide amongst people everywhere so I sent love out to everyone as well. I quickly took the post down after I realized that the post I put up with good intentions to encourage discussion about what was happening at that moment was severely misinterpreted by some. This was all happening before I found out about the horrible line that was crossed that day by protesters.”

First I want to thank everyone for the amazing support you have shown. Unfortunately It has come to my attention in…

However, it should be pointed out that Block’s statement does not condemn Schaffer’s involvement in the protests. As well, Block does not clarify whether or not he agrees with the sentiment behind what happened last Wednesday.

According to CNN, five people have died because of what transpired at the Capitol building last week. At this time, it’s unknown if the FBI has located Jon Schaffer.

What are your reactions to Stu Block’s statement about that deleted Facebook post? Let us know in the comments below.