Rapper Iggy Azalea has caused quite the freak out after donning a Cradle Of Filth shirt that Rolling Stone once called the “most controversial shirt in rock history.”

The year is 1993. English metal band Cradle Of Filth were getting ready to go on tour with Emperor and needed another quick-printed shirt to sell.

“We all were laughing about it, like, ‘Oh my god, that’s so anarchic – can you imagine that on a T-shirt?’ We looked at each other conspiratorially, like, ‘Shall we?’ And yeah, we did it. Even at the time, we thought, ‘Well, this is pushing the boundaries a little bit.’”

If you’ve never seen the shirt, you can view it below: 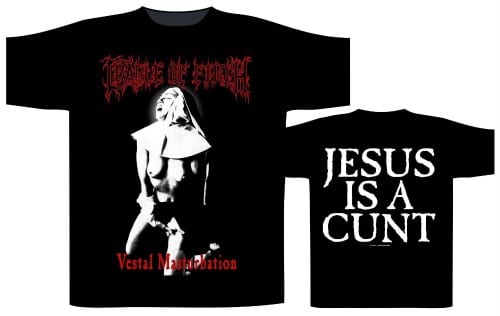 The controversial shirt has found its way back into the mainstream media after rapper Iggy Azalea sported the shirt in an Instagram post on New Year’s Eve.

While the strategic cropping of the photo makes it a bit harder to tell what she’s actually wearing, fans of the band and those aware of the shirt’s existent knew exactly what they were looking at.

The media were quick to pick up the story, with Cradle Of Filth sharing Daily Mail’s coverage along with the post “Any publicity is good publicity, right?”

Iggy Azalea seems to be taking it all in stride.

Metal Hammer reached out to Dani Filth to get his thoughts on the whole ordeal.

“’I wasn’t at all surprised to see my mate Iggy in one of our shirts, as not only has  she extremely good taste when it comes to Black Metal, but the Antipodean rapper and I have been preparing a ‘phat as’ co-operation for some time now, we with me performing under my alternative monicker ‘Filthy F**kin’ Fresh’.”