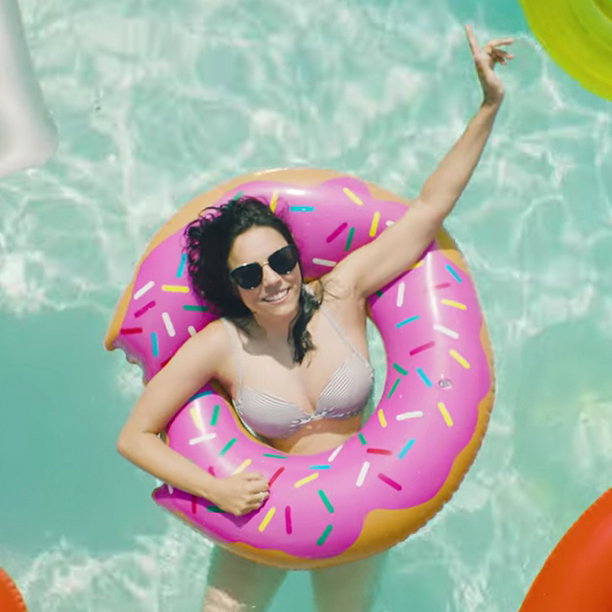 illuminati hotties kick back and relax at the pool in the video for their latest song “Pool Hopping.” The song comes ahead of their newly announced third album Let Me Do One More, out October 1 via Snack Shack Tracks/Hopeless Records.

The indie-rock project of producer and audio engineer Sarah Tudzin, illuminati hotties are bringing summertime energy to the forefront with this new song.

Featuring Tudzin’s signature vocal stylings, “Pool Hopping” is a quirky, fun-loving track about not taking life too seriously. There are ample references to summer and being pool-side, including metaphors about “dipping a toe into the deep end” and anecdotes about “squeezing a melty scoop of ice cream.”

“It’s POOL HOPPING SUMMER,” Tudzin says in a press release. “I’m so stoked to have grilled up a splashy new song & music video (directed by Katie Neuhof) to soundtrack your wettest & wildest parties to date. This track is for when it’s hot, you’re crushing on someone new and your adventure senses are tingling. Come on in, the water’s fine!!!”

That hot summertime vibe can also be seen in the video for the track, which cuts to different pools throughout. In one scene, everyone jumps into a pool, some leaving their shoes on. In others, Tudzin chills in a donut floatie, relaxes in a hot tub wearing a lifeguard swimsuit and takes an aerobics class. There are also shots where the pool doesn’t even have water in it, like when she skates through an empty graffitied pool.

“Pool Hopping” is the second single shared so far from the upcoming album, following the release of “MMMOOOAAAAAYAYA” in April.

After releasing their debut album Kiss YR Frenemies in 2018, Tudzin began working on a second album, which was supposed to be Let Me Do One More. However, due to various issues with their label, they found themselves stuck in a contract and unable to put out the album.

“It felt like any momentum came to a screeching halt. It felt painful to pick up a guitar, to write, to record any loose ends that needed to happen to wrap up the album,” Sarah says.

So, during this uncertain time, Tudzin turned her attention to creating new music, songs that would eventually be on the second album FREE I.H: This Is Not the One You’ve Been Waiting For. Making it abundantly clear with the record’s name, this is not the collection of songs that was originally supposed to be released next.

But after garnering a positive response and getting out of the contract, Tudzin was finally motivated and able to continue finalizing Let Me Do One More. She also knew she didn’t want to sign on to another traditional deal with a label. Instead, Tudzin started her own imprint, Snack Shack Tracks. The label is partnering with Hopeless Records for the album’s upcoming release.

“The songs tell a story of my gremlin-ass running around LA, sneaking into pools at night, messing up and starting over, begging for attention for one second longer, and asking the audience to let me do one more,” Tudzin says about the album.

You can watch the video for the album’s opening track “Pool Hopping” below and pre-order Let Me Do One More here. Let us know your thoughts on the song in the comments!

Let Me Do One More tracklist

in every life there is a bell
one rounded curve of time or tell
I’m on the left half looking
over, over, over, ah-ha

dipping a toe into the deep end
obtusely waving at a new friend
they said the water’s warm
but I’m not sure if you and I are
over, over, over, so I’m

spitting my teeth into their hand
you’re twisted like an ampersand
stuck in the hotel one block
over, over, over, ah-ha
squeezing a melty scoop of ice cream
I let it drip across yr backseat
guess I could wipe it up
but I asked you if maybe you’d pull
over, over, over, now I’m