If you headed to Instagram today to pass time by looking at friends’ stories or share a sick photo of your own, then you probably noticed it isn’t exactly working.

The issues come amid another major outage as PlayStation Network is also experiencing an outage.

Users began reporting that the app is not loading new posts. When launched, the app delivers a grey pop-up reading “couldn’t refresh feed.” When a second refresh attempt is done, it delivers a red pop-up stating, “We’re sorry, but something went wrong. Please try again.”

Pre-existing stories appear to be working for most users, but as stated, the refresh isn’t bringing any new content into feeds.

Instagram, whose parent company is Facebook, is also showing an error message from the latter. When accessed from desktop, it reads, “Sorry, something went wrong. We’re working on it, and we’ll get it fixed as soon as we can.” 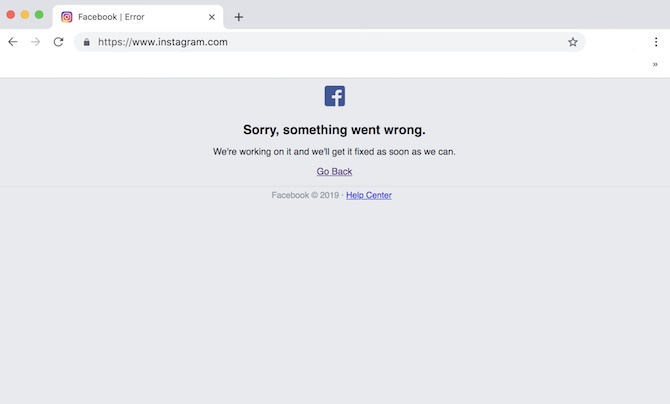 On June 4, Instagram experienced a global outage, which came after a similar instance in April and March.

Instagram users immediately flocked to Twitter to vent their frustrations while poking fun at an Instagram outage being the only time they use the microblogging site. The hashtag #instagramdown started trending just before 6 p.m. EST.

Coincidentally, Taylor Swift also dropped news of her next album, Lover, on Instagram during a live and then with a post (which we would show you, but you know, Instagram is down).

. @taylorswift13 just announced a bunch of stuff on instagram live

The album, which will include Brendon Urie collab “ME!,” sent Swifties into a frenzy with many joking they’re the reason the photo-sharing app went down.

Hey guys @taylorswift13 @taylornation13 instagram is down. At least mine a lot of others have the same problems. We really did THAT 😂😂#PreorderLover

Neither Instagram or its owner, Facebook, has released a statement on the cause. However, this story will be updated should one be given.

Instagram has released a short series of tweets addressing the outage, but no reason has been given:

“We’re aware that some people are having trouble accessing their Instagram accounts. We’re working quickly to fix the issue. #instagramdown

“We are now fully recovered and apologize for the disruption! #instagramdown”

We are now fully recovered and apologize for the disruption! #instagramdown pic.twitter.com/PfALWABRKA

Instagram just took documenting your jam sesh on your story to a whole other level with its’ latest update. The social media platform now allows users to add lyrics to the music in their stories.

To utilize the new function, you must first pick a song from the app’s music library. Then, when you pinpoint the section of the song you want to use your the story, the lyrics will pop up. Then, you can customize the text to look the way you want and add it to your Story.

Instagram has even used Billie Eilish to promote the new feature with her song “my strange addiction.” You can see a video of the ad below.