Is Hulu behind the world_record_egg account or just using the moment to shine a light on social media and mental health?

Remember when a photo of an egg stole Kylie Jenner‘s record for most “likes” on an Instagram post? Everyone has been itching to find out who’s behind the egg, and a mysterious Hulu message made us believe that was coming sooner than we think.

Yesterday, the viral egg promised some sort of “big reveal” following this year’s Super Bowl, with Hulu sharing similar teasers. Now that the reveal has happened, it just has us asking even more questions.

The egg ended up crushing Jenner’s old record of 18 million likes and is currently sitting at a whopping 52 million likes.

The account has continued to post photos since its Jan. 4 launch. Each one shows the Instagram egg cracking more and more. Last night, the egg shared a football-inspired image with the caption, “The wait is over. All will be revealed this Sunday following the Super Bowl. Watch it first only on Hulu.”

In the midst of the Super Bowl, Hulu kept dropping hints. They took to their Instagram story to direct viewers to more clues. 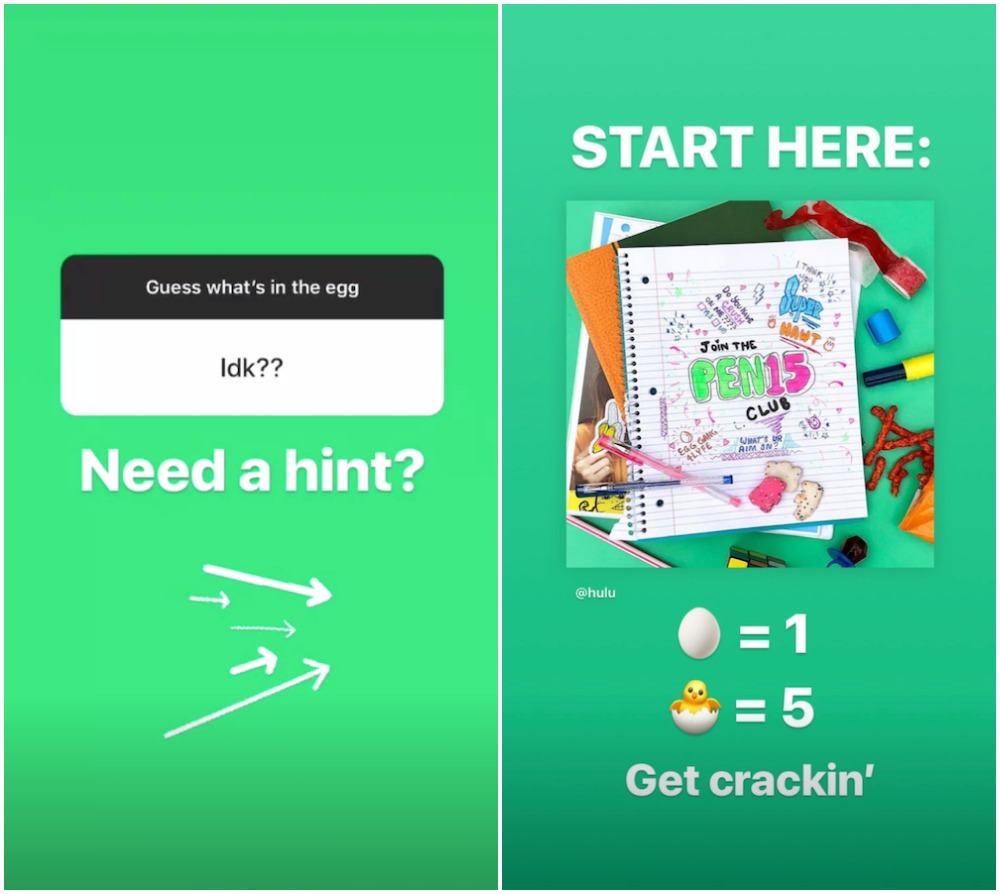 Once clicking on the first photo advertising their original series Pen15, the caption shows four hatched chicks and three eggs. Using the key above, this translates to fives times four equals 20 and ones times three equals three. Fans in the comment began pointing out that this adds up to 23, and “W” is the 23rd letter of the alphabet.

Using this same logic through the rest of their egged photos, which total 13 images, it spells out, “We liked the egg.”

“Are you eggcited for the reveal? Watch World Record Egg at 8PM PST on Hulu.”

Are you eggcited for the reveal? Watch World Record Egg at 8PM PST on Hulu. ? #EggGang pic.twitter.com/uSn0mBJeNw

Once on Hulu, you can see a new TV show titled World Record Egg. The first episode’s description reads, “Watch as the World Record Egg reveals something very personal about its experience after becoming a global phenomenon.”

“Hi, I’m the world_record_egg (you may have heard of me). Recently I’ve started to crack. The pressure of social media is getting to me. If you’re struggling too, talk to someone. We got this. MentalHealthAmerica.net #talkingegg”

Thank you @hulu for not making this a product endorsement ❤️ #hulu #worldrecordegg #superbowl #eggang pic.twitter.com/XB6PTWJa0t

Mental Health America, the subject of the video, chimed in on the big reveal on Twitter:

“We’d like to thank #TalkingEgg for shining a limelight on #mentalhealth tonight with an important message. Not everyone chooses to #fightintheopen for mental health, but you did for the 1 in 5 Americans living with a mental health condition. Thank you, #EggGang!”

We’d like to thank #TalkingEgg for shining a limelight on #mentalhealth tonight with an important message. Not everyone chooses to #fightintheopen for mental health, but you did for the 1 in 5 Americans living with a mental health condition. Thank you, #EggGang! ?? pic.twitter.com/9KPlXG5re4

It’s still unclear if Hulu and Mental Health America launched the world_record_egg to start a conversation on social media and mental health or if they’re using the viral moment to shine a light on it.

Just watched the #worldrecordegg reveal. I’m between sort of let down and very satisfied that they did something positive with it….

While others praised it.

okay. ya know what. serious round of applause to @hulu for the masterpiece that is the world record egg. pic.twitter.com/Z7iyb79EaR

fine, the world record egg reveal is a 30 second video on hulu that is i guess a PSA for @MentalHealthAm which ok i can get behind

What do you think of Hulu and Mental Health America’s big reveal? Sound off in the comments below!