Apple has officially unveiled the iPhone 11 and needless to say, people online have a lot of thoughts about the new camera and more.

The new phone announcement unveiled that Apple is introducing a reverse camera with multiple lenses. You can see what the phones look like below.

The traditional iPhone 11 will have a reverse dual-camera setup with an additional wide lens that allows for 2x optical zoom. The iPhone Pro phones will have a three-lens system for the reverse camera, so users can really experiment with wide-angle and zoomed shots.

The new camera will also have a Night Mode which will reduce motion and blur to make it easier to take photos in the dark.

One of the most exciting parts is that the new phone will come in new colors — white, green, yellow, purple, black and red. The iPhone 11 Pro will be in green, silver, grey and gold.

Another feature will be what the company calls “enhanced Face ID” where it will speed up the process of scanning the user’s face to unlock their phone.

You can see tweets from those present at the announcement that showcase all the new features of the phones below.

Here’s a handy image for all the cool details on the iPhone 11. #AppleEvent pic.twitter.com/b1U7FgbXNQ

Of all the details revealed, nothing caused more of a frenzy than the appearance of the new cameras. People compared the look to a fidget spinner, a stove and more on Twitter. See what they had to say about all that Apple unveiled below.

The iPhone 11 can also work as a stove #AppleEvent pic.twitter.com/QuXSMpFgXk

You can also shave your face with the new iPhone 11. pic.twitter.com/sCZ5Cd97vA

I don’t like iPhone 11, so I’ll just wait for iPhone 12#AppleEvent pic.twitter.com/esyZsk1OLQ

This is the new iPhone 11 pro #AppleEvent pic.twitter.com/4dV6Apbsgj

Along with the phone announcement, the company introduced a new Apple Watch series and iPad. They also introduced a streaming service Apple TV+ featuring original content and Apple Arcade, which will be a subscription service for games.

What do you think of all the new Apple products and the new iPhone? Sound off in the comments down below! 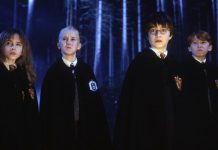 A ‘Harry Potter’ reunion just happened, but not in the way you may think 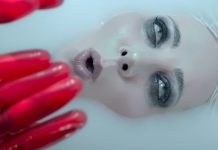 Watch In This Moment’s powerful new video for “As Above, So Below”