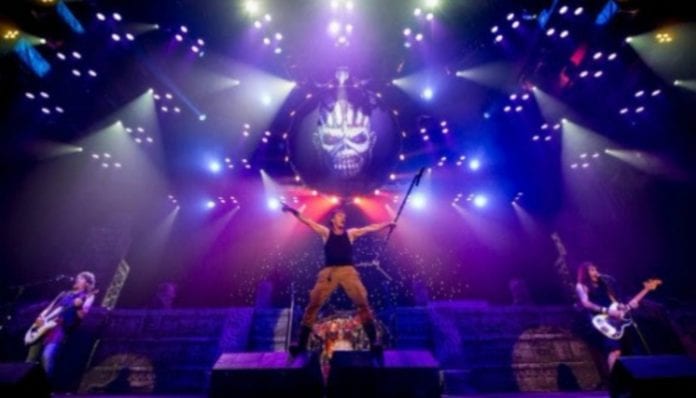 If you’ve ever seen Iron Maiden live, you know they have a high octane show and if you’ve paid attention to guitarist Janick Gers, he loves to swing his guitar around.

During a recent show in San Antonio, Texas, Gers was doing his signature guitar swinging but accidentally launched his instrument off into the crowd.

Luckily, Gers didn’t appear to hit anyone with the guitar when he threw it.

After getting a stage tech to bring the guitar back to him, you would think he would get straight back to playing but you would be wrong.

Gers picked up the guitar and went right back to nonchalantly swinging it around as if he didn’t just toss it far away from the stage.

You can watch the guitar tossing in the player below.

The San Antonio set marked the final show of the band’s ‘Legacy Of The Beast Tour’ which saw the metal veterans bringing their “biggest production ever.”

Singer Bruce Dickinson commented, “We’re immensely proud of this show and we’ve had great reactions from the many fans who came to see us in Europe earlier this year.

“The production is based on our mobile game THE LEGACY OF THE BEAST, which basically takes various incarnations of Eddie into many different Maiden Worlds. This inspired us to put together a stage show to take our fans through different Worlds and experiences set to appropriate songs.”

Iron Maiden were also announced as one of three headliners for next year’s Download Festival along with Kiss and System Of A Down.

“Next year we will play a number of countries and cities we have yet to visit on this incredible tour, so it is terrific to be able to accept the invitation to return to Download in 2020 and we will certainly go to town and add a few extra items to the show,” says Dickinson.

“This will be our seventh time headlining at Donington Park. It’s home turf and we all really enjoy playing this Festival, the vibe from the crowd is always fantastic.”

What do you think of Iron Maiden guitarist Janick Gers whipping his guitar into the crowd? Let us know in the comments below.