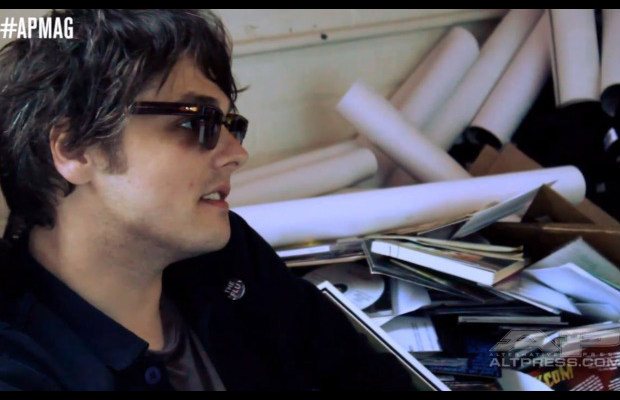 “I turned back into a pumpkin,” Gerard Way used a reverse Cinderella metaphor to describe his next step in music in a new interview with The Hollywood Reporter.

“What I'm doing is super organic and completely pure, and I'm positive the longer I continue doing it, it will stay that way,” Way said.

The former My Chemical Romance frontman remains exploritory and metaphysical while divulging more details about his upcoming project in his latest interview. indicating again, “I'm trying to figure out what I want to do and what the universe needs me to do.”

SO SOLO?
Way does clarify (or make more cryptic, depending on how you look at it) previous remarks he made about whether or not the project will be a solo or collaborative venture. “I don't quite know how to describe it or what to call it or how to put a name on it, if it's a band or solo thing.”

In a previous interview, Way had noted, “I’d have to be a lot older and I’d need a lot more life experience [to do a solo project]. So I don’t feel like doing that. It just doesn’t feel right.”

For our AP 300 creative partner and cover star, it appears that only the universe will, indeed, tell when it comes to his musical direction.


WE DON'T NEED NO STINKIN' UNIVERSE TO TELL US…
What is solidly the horizon for Gerard:

-The True Lives Of The Fabulous Killjoys, the comic co-written by Way and informed by MCR's final album Danger Days… is out June 12.


-“Anti-Bats!,” an episode of The Aquabats! Super Show! directed by Way and starring his brother and former MCR bassist, Mikey Way (who also recently confirmed a new band), is set to air on HUB Network June 29 at 1 p.m. ET.

And, AP #300 hits newsstands today, May 31! The issue features our first ever MCR cover story from 2004 with brand new, exclusive artwork and a short story by Gerard. Pick up the cover on the left at your local retailer and order the subscriber-only cover designed by Way on the left exclusively via our online store.