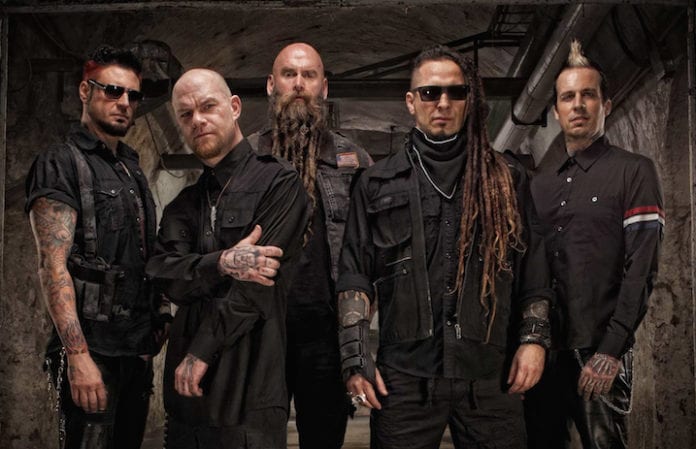 Ivan Moody, vocalist of Five Finger Death Punch, said: “I am embarrassed and ashamed to admit that I have fallen off the wagon again. I was on shaky ground prior to our performance in Tilburg, and although a lot of the events of that show were out of my control, the shame of not delivering pushed me over the edge.  It would not be fair to my bandmates or my fans to continue to perform in my current condition. One of the worst parts of addiction is the loneliness you feel, so having the support of my band and all the knuckleheads is what drives me.  I am committed to getting better so I can get back out on stage as soon as possible.”

Zoltan Bathory, guitarist of Five Finger Death Punch, said: “As a band, we are committed to supporting Ivan's road to recovery. We are as baffled and saddened as anyone to watch our brother continue to struggle. Almost everyone in the world knows someone who struggles with addiction, and can relate to how the self-destruction of someone they care about is very difficult to watch. Five Finger Death Punch has every intention of playing the dates we’re committed to and beyond. The band is bigger than any one member.”

Tommy Vext, the vocalist of up and coming metal band Bad Wolves, said: “It is a tremendous honor to share the stage with Five Finger Death Punch on these remaining dates. Today I am blessed with over 8 years of sobriety, so I can certainly empathize with Ivan’s struggles. Not only do I feel a responsibility to deliver for the fans of Five Finger Death Punch on these remaining dates, but also to deliver for Ivan so he can get back to work as soon as he is healthy.”

Five Finger Death Punch have posted a statement on their Facebook following Moody's departure from the band last night, announcing that they would continue with all of their planned shows.

You can read the official statement below.

“Those who have followed 5FDP from the beginning can tell you there has always been an element of danger and unpredictability in our music and in our shows. That’s Rock ‘n’ Roll. When you do over 150 shows in a year, you will inevitably have a few derailments, but the train always keeps on moving. Last night in Tilburg was one of those instances, but as they say, you aren’t a race car driver if you don’t wreck a car or two.

We can’t wait to put on amazing shows tomorrow night at Nova Rock all the way to our just announced winter tour all over Europe. See you all on the race track….bring a helmet….

Five Finger Death Punch vocalist Ivan Moody has allegedly quit the band—yet again—following a mid-concert meltdown during a recent performance in Europe, according to a new report from Theprp.com.

Moody didn't mince words during 5FDP's show at the 013 venue in Tilburg, Netherlands, on Monday, June 12. The musician declared from the stage, “I'll let you know ahead of time, this is my last show with Five Finger Death Punch.” The sudden proclamation from Moody was captured on video—watch it below.

As previously reported by AP, Moody first announced he was quitting Five Finger Death Punch in April. The singer quickly recanted that statement, issuing a press release claiming his initial remarks were taken out of context. Now, it appears that onstage tensions among 5FDP members have led to the vocalist again claiming he is leaving the group, this time in front of paying concertgoers.

During the show, as recounted by those in attendance, the band frequently left the stage during their performance to “argue amongst themselves and more,” seemingly precipitating Moody's unexpected resignation. A local dispatch reports that the concert began without Moody on the mic, musician Tommy Vext apparently filling in on vocals for the first few songs of the set.

5FDP guitarist Zoltan Bathory tweeted that the incident was “not a publicity stunt” shortly thereafter, asserting that the band's disastrous Tilburg show was the result of “Murphy's Law on full throttle or more like Spinal Tap on 11.”

No dude not a publicity stunt. Just Murphy's Law on full throttle or more like SpinalTap on 11 a lot of human & technical WTFs #itsRockNRoll

However, despite Moody's onstage insistence that he is again quitting the band, a new statement from Bathory says that the band is alive and well (see below). 5FDP announced a new string of European tour dates with In Flames as of this morning, June 13. See the list of cities and dates after the clip. (via Loudwire)

“We are currently playing all the European festivals and are having an amazing time. As these massive crowds are singing along every word of the lyrics, it feels like Europe is truly becoming the second home of Five Finger Death Punch. We can’t wait to come back this fall and especially with In Flames which is one of my favorite bands. This will be something special to see…”