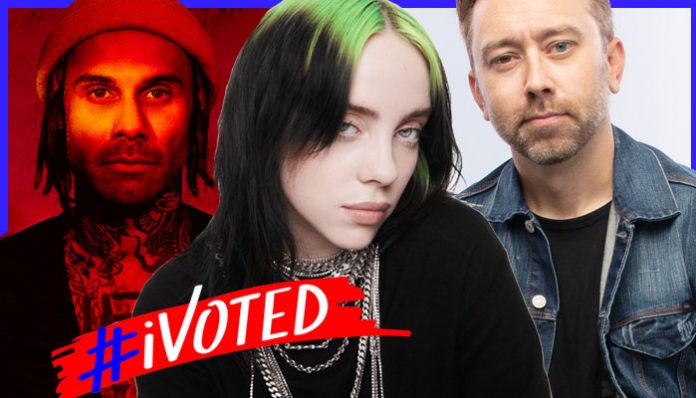 Billie Eilish, Jeff Tweedy, Taking Back Sunday, Trey Anastasio of Phish and over 600 other artists will take part in the largest single-night digital concert ever this Election Day, the #iVoted Festival 2020.

The event, which runs from noon to 2 a.m. ET Tuesday, will be held on the streaming platform Mandolin. Participating acts will either perform or share exclusive announcements and messages with voters.

Promoters are already calling #iVoted the largest music “festival” of the year. The event encourages fans to submit selfies with their blank mail-in ballots as an RSVP for select shows.

CEO Emily White, who founded #iVoted alongside Mike Luba and Wilco’s Pat Sansone, says the #iVoted team pivoted to an online event in April. She credited her executive and marketing teams for coming up with the event’s “festival” label.

“At some point shortly after our pivot, they said to me, ‘This is a festival,’” White says. “And from that point on for 2020, #iVoted officially became #iVoted Festival, as opposed to organizing individual shows or webcasts.”

White also says artists’ reactions to the expanded festival format of the event were “beyond inspiring.”

“Lots of ‘Hell yes!’ or ‘I’m in!’ without hesitation,” White says. “All I care about is getting as many people as possible to turnout and vote for this and all elections in the future. At the same time, I was an athlete growing up, so although it was never a goal, I do like breaking records.”

#iVoted first launched during the 2018 U.S. midterms, with over 150 venues in 37 states letting fans enter shows in exchange for polling-place selfies. Tuesday’s event won’t be taking place in person this time around. But White still hopes it helps attendees “understand the power of voting.” That goes for young voices, too. Fans under the age of 18 can submit videos about their excitement for voting to attend. Those who live outside of the U.S. are also invited to stream.

Tuesday’s event will also feature performances and appearances from Living Colour, 3OH!3, Joywave, FEVER 333, Andy Jenkins, the Regrettes, Acid Tongue, Couchsurf, Cherub, Everyone Orchestra, DJ Logic, Halestorm, Jaret Reddick of Bowling For Soup, Rise Against, Young The Giant and many more. The full lineup and schedule can be viewed here.

The event will also feature performance “stages” named after states, such as Wisconsin and Colorado. “Stages” will also be named after advocacy groups such as HeadCount. #iVoted selected its state-stage artists based on location-based streaming data.

“This is how we make tangible change for all, both for the highest office and in each of our local elections,” White says. “Hopefully fans can come together with their favorite artists to celebrate our sacred right of voting. And while reflecting on doing so, also have a great time and want to do it again for all elections moving forward.”

Get more information on voting and upcoming elections from one of the below online resources:
HeadCount (Campaigning and registration information).
Vote.org (Absentee and early voting rules for each state).
Rock The Vote (A nonpartisan nonprofit making democratic participation more accessible).
Turbo Vote (Election reminders, voter registration and absentee ballot applications).

You can check your polling place here, and make sure to wear a mask when you head out to vote.