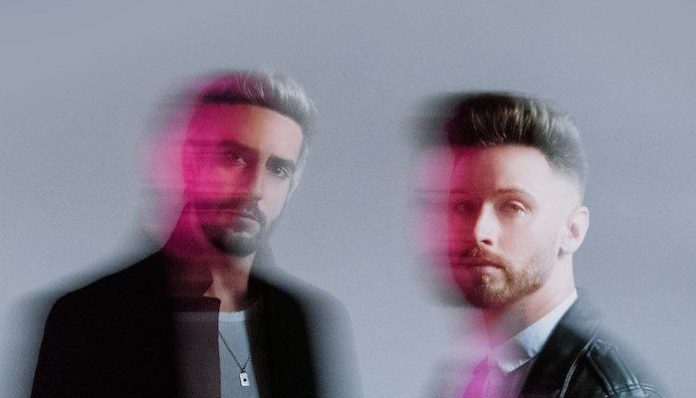 Following the release of their first track at midnight, WhoHurtYou are now dropping their debut song’s music video. The duo—consisting of Kevin Fisher on vocals and All Time Low guitarist Jack Barakat—accompanied the breakup track with an equally as dark video.

In an interview with Billboard, Barakat opened up on getting into writing for the first time.

“This wasn’t something I expected to do,” he says. “It definitely took a little bit of convincing on Kevin’s part. He’s been writing songs for years and has had some success. I’ve been in a band but hadn’t written music before. To get me into the studio, he said, ‘Dude, you have a story to tell. We both have a story to tell. Let’s get in the studio and see what happens.’”

The band also revealed their first EP, Stages, will be dropping later this year via Fueled By Ramen. The release will chronicle the stages of a breakup, ending with an unreleased track “Why Can’t We Be Friends.”

Check out the “Wish We Never Met” video below.

All Time Low guitarist Jack Barakat had been pretty cryptic on the “little somethin’ somethin’” he’s been working on since first breaking the news at Coachella. Barakat posted a mysterious teaser earlier this week and then confirmed his new side project, WhoHurtYou, with a self-reflective video on mental health.

Read more: Taco Bell offering free tacos today, here’s how to get them

Barakat ventures into a more alt-pop sound with the new project with Kevin Fisher on vocals. Ahead of the track’s release, the duo teased its lyrics on their socials.

Today, the band shared the new track, explaining, “#WishWeNeverMet is a song about wanting to forget someone so badly when they are no longer in your life and the anger that comes along with knowing that you can’t.”

#WishWeNeverMet is a song about wanting to forget someone so badly when they are no longer in your life and the anger that comes along with knowing that you can’t. https://t.co/vbg8MicBMC pic.twitter.com/nxGF8ZLLYR

You can check out the new track below or here.

Barakat took to Instagram earlier this week to tease “WhoHurtYou 6/21” along with a cryptic video. Tagged in the photo is a social media account recently created for WhoHurtYou along with Fueled By Ramen and singer/songwriter Sweet Talker aka Fisher.

The following day, the WhoHurtYou account posted a brief interview and montage of Barakat opening up on the new project with Fisher.

“We are WhoHurtYou,” the post reads. “A dark pop project started between @jackbarakat and @iamsweettalker with the purpose of healing from heartbreak and turning a negative experience into something positive.”

“I’ve always felt that I’ve had to portray myself a certain way online,” Barakat says in the video. “Kind of be this comic relief and someone who’s always in a positive mental state. It’s just not the truth. And it’s not real. And everyone has their ups and downs, and I’ve never really put mine out there.

“Last year was a really tough year for me. I was going through my first big breakup and handled it all the wrong ways, and I was doing the wrong things. In those moments, I had close friends of mine urge me to see a therapist and turn my life around.”

Barakat goes on to explain Fisher opened up on how songwriting became a therapeutic experience and how both musicians were going through similar things in their lives. As a result, the duo hit the studio and began work on some songs.

“At first I was super nervous to share this darker side of myself and more honest side,” Barakat explains. You can view the full video below.

We are WhoHurtYou. A dark pop project started between @jackbarakat and @iamsweettalker with the purpose of healing from heartbreak and turning a negative experience into something positive.

Prior to revealing the project, Barakat and Alex Gaskarth did some press at Coachella where the guitarist teased it. Gaskarth has been pretty busy with his side project Simple Creatures alongside Mark Hoppus. However, guitarist Barakat has been keeping pretty busy himself.