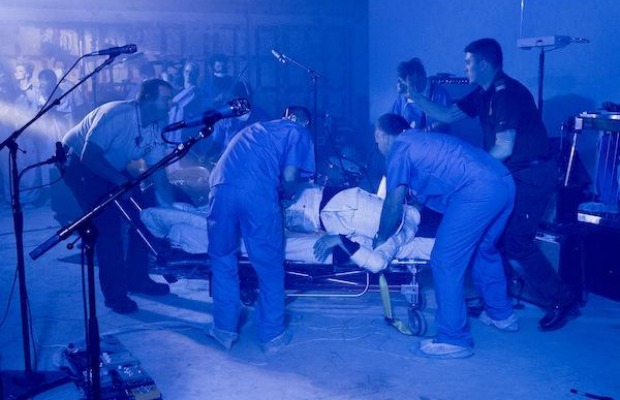 Last night, Jack White staged an elaborate, theatrical secret show in London with help from the Punchdrunk Theatre Group. White based the show’s concept around his latest album, Lazaretto, which is defined as an isolation hospital for people with infectious diseases.

During the show, fans were asked to change into blue medical gowns and eventually quarantined in a smoke-filled chamber. According to the Guardian, White then played a 30-minute set, which included “Lazaretto,” and The White Stripes’ “Dead Leaves on the Dirty Ground” and “St. James Infirmary Blues.” As part of the act, White eventually succumbed to a mysterious disease, was strapped to a stretcher and taken away by a waiting ambulance.

At the end of the show, fans were left with the gift of a personalized “prescription” from “Dr. White.” You can read a full description of the show and see photos below via White’s label, Third Man Records.

“Drawing on the themes of Jack White's current album, 'Lazaretto', a term used to describe a quarantine island, the experience began with an elaborate online treasure hunt. A spoof medical infomercial from 1949 appeared in the archives of online medical resource The Wellcome Trust, which contained various obtuse clues that led Jack's superfans to a website belonging to the fake medical company, Vescovo & Company. Thousands of fans submitted their details to this website as part of an online screening for a contagious disease. A lucky few progressed through the screening process that lead to them receiving a telephone call from Punchdrunk actors inviting them to an out-of-hours appointment at the Vescovo Clinic. The clinic had been created for this one occasion by Punchdrunk Theatre across multiple floors of a disused building owned by The Vinyl Factory.

On arrival, fans were asked to change in to blue medical gowns before being subjected to a variety of treatments testing in a maze of medical rooms staffed by Punchdrunk actors. Chaos descended as an outbreak alarm was raised and terrified fans were herded into a smoke filled quarantine chamber. Finally a screen was dropped to reveal Jack and band in full medical uniform who proceeded to belt out a thirty minute set before Jack himself succumbed to the mysterious disease. The rock star fell to the ground in a fit of convulsions before being strapped to a stretcher and wheeled off to a waiting ambulance.”

If you missed it, watch White’s recent show at Dublin’s Royal Hospital, where the venue cuts him off and kills the power, but he continues performing anyway.