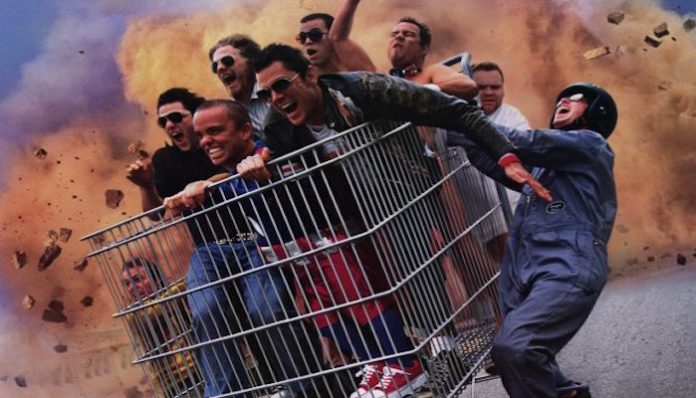 Speculations and rumors on a fourth Jackass movie have circulated ever since Ryan Dunn’s tragic death in 2011, but Jackass members have been on the fence about the sequel for the last couple of years.

Chris Raab, formerly of Jackass and CKY, recently claimed to have spoken with almost everyone in the crew on his podcast, in which the members expressed interest in filming a new Jackass movie.

“I get the feeling that everyone’s pretty interested in it,” Raab says. “I’m not sure that it would ever happen. Ryan [Dunn] was a huge part of that, so it’s sort of weird without him. I feel like if Tremaine and Spike [Jonze] and Knoxville said, ‘Hey, let’s do it,’ then I imagine it would go forward. If they were to say it, I don’t think there would be pushback from others.”

Although Raab didn’t mention speaking to leader Johnny Knoxville, he teased a photo this April reuniting with his fellow stuntmen, sparking rumors for a fourth movie.

Look at who I ran into at dinner.

Jackass originally aired for three seasons on MTV in 2000 and was followed by Jackass: The Movie in 2002. After the success of the first movie, the cast returned for Jackass Number Two in 2006 and Jackass 3D in 2010. Both films were later accompanied by Jackass 2.5 and 3.5 which featured deleted scenes from their respective films.

Following the films, the crew went their separate ways with Knoxville notably starring in Bad Grandpa and Action Point. Behind the camera, Tremaine most recently directed Mötley Crüe biopic The Dirt.

Knoxville spoke to Entertainment Weekly in 2018 and claimed that Jackass 4 is a possibility.

“It’s possible, for sure,” Knoxville told Entertainment Weekly. “It’s not like we’re saying no. If we did do a new one, we’d have to bring in some new younger guys—just to bring some fresh blood into it. But it’s possible. I still write ideas down, just in case I get that twitch again. We’re sitting on a ton of new ideas. There was so many that we didn’t get to shoot for Jackass 3. We have more ideas than we could shoot for Jackass 4, I’ll tell you that.”

Although Jackass 4 isn’t officially confirmed, let’s hope the cast will carry on their legacy with another sequel.