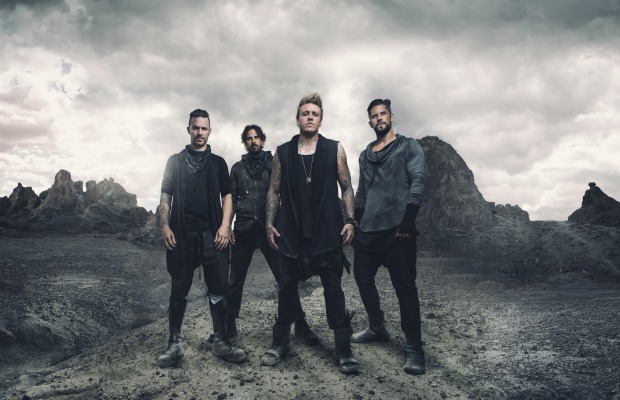 As Papa Roach prepare for the release of their new album, Jacoby Shaddix chatted with Q103 in Albany, N.Y. and confirmed the record is set to drop this May—plus, he talks even more about the sound and dynamic of their new music.

“This is a very dynamic album. It ranges from heavy and in your face with songs like ‘Crooked Teeth,’ and then it also has a pop sensibility in it, like ‘Help,’” Shaddix says. “Then there’s stuff that’s kind of grimey, street hip-hop. It’s all over the place.”

“We really wanted to venture back into the earlier years of Papa Roach, with albums like Infest, and dig around in that territory and see who we could bring back that felt right, real and new,” Shaddix says.

Read more: Our Most Anticipated heavy releases of 2017

After releasing “Crooked Teeth” and “Help,” the band revealed that the new music will feature the likes of rapper Machine Gun Kelly and singer/songwriter Skylar Grey.

“I’ve always been a big fan of hip-hop,” says Shaddix. “There’s some new artists that I really am a big fan of, Machine Gun Kelly in particular. We collaborated at the [APMAs], and that was awesome. And then I had this track called ‘Sunrise Trailer Park,’ and I needed a guest spot, and I played him ‘Crooked Teeth,’ and he was just, like, ‘Dude, P-Roach is back! This is so sick!’ So I was, like, ‘Hey, I’ve got this track I would love for you to be on.’ And so it was very organic.”

And after collaborating with Maria Brink on “Gravity” on the band’s previous album F.E.A.R., Shaddix says they’re excited to feature someone outside of the rock realm.

“We’ve got this other track called ‘Periscope.’ We wanted to have a guest female vocal on it, and on the last album, we had Maria Brink from In This Moment on ‘Gravity.’ I didn’t wanna just go in and grab another rock chick,” Shaddix says. “I wanted to work with somebody that was outside the box and different but that I was a fan of. So I’ve been listening to this girl Skylar Grey for years now. And she’s been on some great tracks—she’s been on some Dre stuff, some Eminem stuff, she’s been on a Fort Minor track. But she’s kind of this indie, alternative, pop type of girl, and she’s just got a lot of credibility in that scene, and she’s got a great voice, and I’m a big fan. And so I thought, why not try some collaborations and some guest spots that were outside the box, not the norm?”

In an interview with Alternative Press earlier this year, Shaddix said the band were excited to switch things up with their new album.

“When it came time to decide—when we were going in for the record—we wanted to switch it up,” Shaddix says. “I just kind of felt like rock music is starting to sound the same and get a little bit homogenized, and we want to carve our own path. We were considered a nü-metal band back in the day, but we always kind of had our own vibe and our own edge, and we want to maintain that as a band. This record is bold and adventurous, but I believe that it’s all things great about Papa Roach.”

And, to the excitement of Papa Roach fans everywhere, Shaddix also explained that they’re already working on new music, even though this record has yet to be released.

“We went back in the studio and started creating some music again for a new, new record. We have such a good creative flow that we’re, like, ‘You know what, man?’ Let’s just jump in the studio,’” Shaddix says. “We’ve got some time right now. We had a month set aside. Everybody in the band was just, like, ‘Let’s just go back in the studio.’ And so here we are.”

Give the full interview a listen below.

How stoked are you for new Papa Roach? Let us know in the comments below!