Today has been long awaited by both Jeffree Star and Shane Dawson fans alike. After almost a year’s worth a teasing and a six (so far) episode series on YouTube, the Shane x Jeffree Conspiracy Collection has officially launched.

However, the highly anticipated collaboration proved to be in such a high demand that it broke both Star and Morphe’s websites in the process.

Probably the most sought-after piece is the 18-color Conspiracy Palette which comes in an incredible black case and contains shades such as “What’s The Tea” and “Cheese Dust.”

The #Conspiracy Collection 👁 Honestly I couldn’t have asked for a better person on the planet to collab with 💯 Thank you @shanedawson for giving this project your entire heart and soul! 🐷 #ShanexJeffree And thank you @AndrewSiwicki for being there every step of the way. Launching THIS Friday 11.1 @ 10AM PST / 1PM EST 🖤 #jeffreestarcosmetics #conspiracypalette

You can view everything in the Conspiracy Collection below.

Fans have been following the creation of this collection in Shane Dawson’s YouTube documentary series, The Beautiful World of Jeffree Star.

In the latest episode, the collection was unveiled with Star explaining the preparations Jeffree Star Cosmetics was taking to prepare for such a massive launch.

Slated to hit Morpe’s website and JeffreeStarCosmetics.com Nov. 1 at 10:00 a.m. PT/1:00 p.m. ET, fans were ready to snag whatever they could from this collection.

However, Shopify was not able to handle the massive amount of traffic surging to the site, sending it crashing almost immediately. 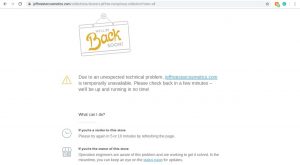 You guys CRASHED the site! Shane’s in a ball crying on the floor. Working on getting everything back up!!! #shanedawsonxjeffreestar

Star continued to give updates via Instagram Stories, explaining that the issue was surfacing from the Shopify end.

“Hey guys. OK. I can’t believe any of this is even happening,” Star says on IG. “We’re two hours in and here’s the real mother-fucking tea. The platform that we use to sell our makeup is called Shopify. A lot of people use it. There has been so much traffic, me and Shane combined broke the platform.

“We’re on hour two and thousands of people are being checked out per minute. There was so much traffic it broke the front end, it broke the back end, everything is fucked. Ya’ll broke the internet. We’re doing everything in our power but it is not on the Jeffree Star Cosmetics team. It is out of our hands right now. We are sitting ducks waiting for this to be fixed and we are in a state of shock. I am so sorry.”

Three-and-a-half hours into the launch, Shopify remained broken. Dawson and Star soon realized that 6-8 items from the collection never appeared on the Shane tab on the website, including the Mini Controversy Palette.

Star explained that they were working to fix the issue, telling fans that if they searched the word “Shane” on the website, all items would appear.

We are waiting for the website that hosts our store to be fully restored, this is out of my and #JeffreeStarCosmetics control as we wait 🤯 I’m so sorry everyone! This is the craziest launch of my fucking life!!! #shanedawsonxjeffreestar https://t.co/lv8BN1BAxv

Before the full #shanedawsonxjeffreestar collection could even go live, you guys broke the site 😭😱 Not all of the products went live when we launched.. We are currently fixing all issues on our end and praying that @shopify can get back on track shortly 🐷

i’m so sorry for the wait. i cant even enjoy the launch cause i feel so sad that you guys are waiting and having issues with the site. but i PROMISE it’s not jeffrees team. they had everything in place for this and have been working 24/7 on this for months. 😓❤️ https://t.co/i1tdWvcCop

Despite the issues, the website has slowly been coming back to life with Star confirming that every unit of the Conspiracy Palette was officially sold.

I can confirm now that every single unit of the #ConspiracyPalette has sold out ❌ I’m so proud of you @shanedawson!!!
The website issues have us devastated but thank you all for being patient!! 😰👽 #shanedawsonxjeffreestar

Fans are encouraged to hang in there while Shopify’s support team continues to look into the issue.