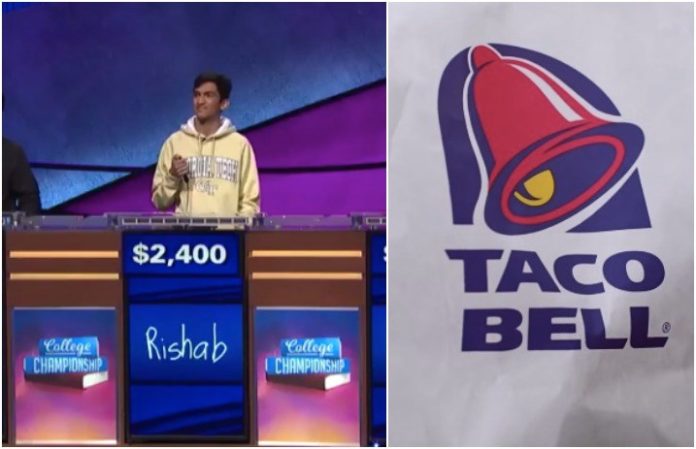 We're all guilty of spending way too much money at Taco Bell, and honestly, who can blame us?

It's affordable, and it's pretty delicious, so we don't mind spending a few dollars here and there, but this Jeopardy contestant decided that if he won the big prize, he would spend a little more at the fast food chain than the average person.

On a recent college edition episode of Jeopardy, Georgia Tech freshman, Rishab Jain, told host Alex Trebek that if he won the $100,000 prize, he would put the money to good use by spending it all on a lifetime supply of Taco Bell.

Hey @tacobell, would 100,000 #TripleMeltBurritos be enough to last Rishab a lifetime? pic.twitter.com/aYu0PS4yln

While Jain didn't make it to the big prize, that doesn't mean he went home empty handed. Per a report from People, Taco Bell saw the moment, and the company will be sending him $500 in gift cards. They also tweeted Jain, saying: “College can feel like a lifetime. We’ll help you get through it, Rishab.”

College can feel like a lifetime. We'll help you get through it, Rishab. pic.twitter.com/CRSorPyO0w

While Jain didn't win the $100,000 prize, he can at least get himself a nice little supply of Taco Bell Mexican pizzas and Crunchwrap supremes to get him through college.