With the general elections this November drawing closer, Joe Biden and Kamala Harris are continuing to hit the campaign trail (both in the United States and in Animal Crossing).

Now, the Biden-Harris campaign has unveiled some brand new merchandise and the designs may surprise some of you.

Read more: Eminem’s home intruder reportedly said he was “there to kill him”

The Biden-Harris campaign is clearly leaving those stuffy old political campaign designs behind. As we’ve seen in the past with Donald Trump‘s MAGA hats, political merchandise can have a major influence on society.

One of the Biden-Harris campaign’s most popular items right now is the “Tie Dye Concert Tee.” The shirt is in collaboration with Joe Perez and is truly reminiscent of our favorite concert and festival shirts. Perez previously worked as an art director for Kanye West‘s DONDA label. The cotton tee comes in a cool blue tie-dye design and is selling for $50.

Another Biden-Harris campaign item is a clear nod to Harris’ Chuck Taylors. Harris nearly broke the internet this week after she was seen deboarding a plane in a pair of classic Chuck Taylors. Onlookers quickly spotted the shoes and Chuck Taylors eventually started trending on Twitter.

The “Aviators and Sneakers Navy T-Shirt” includes Biden’s iconic aviator sunglasses. However, the shirt design also features a few different pairs of Converse, a clear tribute to the shoes Harris has been rocking on the campaign trail. The cotton shirt comes in navy and is available for $30. 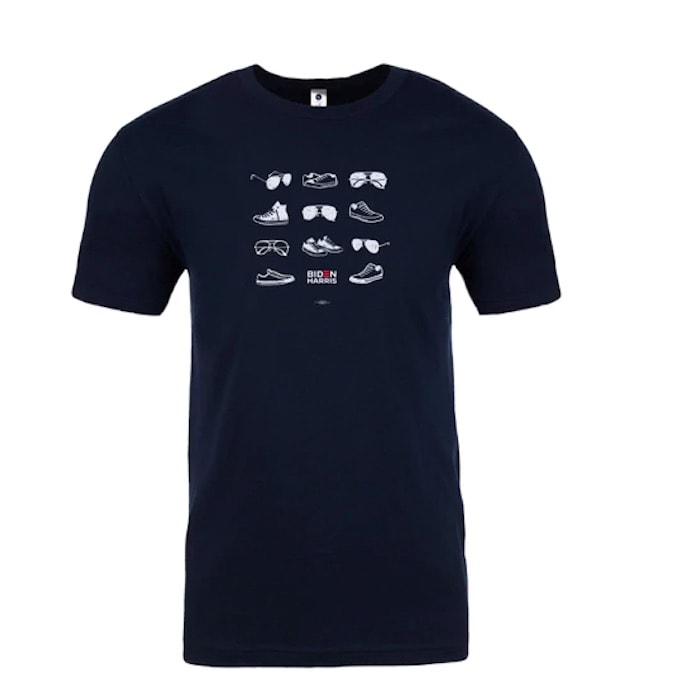 Along with the new merch, Biden made headlines this week for another reason. His Wikipedia page for campaign endorsements is now the longest-ever page on Wikipedia.

The article features hundreds of campaign endorsements from both political figures and familiar faces within entertainment. Included in the very long list are individuals such as Barack Obama, Cardi B, Billie Eilish, Taylor Swift, Katy Perry and Demi Lovato.

Fall Out Boy fans are also reminding the internet that the band wouldn’t exist if it wasn’t for the Biden campaign and Pete Wentz’s parents.

All of the Biden-Harris campaign merchandise is available to view here.

What are your thoughts on the campaign merch? Let us know in the comments below.

Get more information on voting and upcoming elections from one of the below online resources: