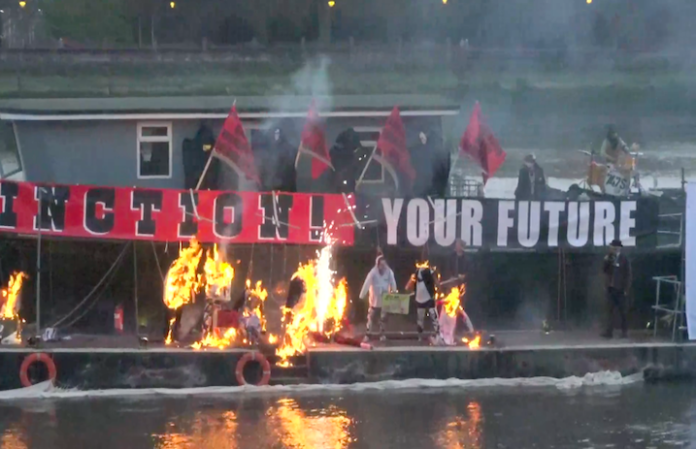 It's official—over $6 million worth of rare punk memorabilia have been burned today in the River Thames by Joe Corré.

Read more: From the Smiths to Green Day, map explains the detailed history of alternative music

As Alt Press reported earlier this week, Corré, son of Vivian Westwood and Malcolm McLaren protested the popularity of punk by promising to burn all of his rare collectibles—including items belonging to Sid Vicious and Johnny Rotten—on the 40th anniversary of the release of “Anarchy in the U.K.” by the Sex Pistols.

“Welcome, to the great punk rock swindle,” Corré says while standing on the barge with the items. “A time when you can buy McDonald's punky nuggets, an Anarchy in the U.K. credit card at 19% APR, punk rock car insurance and bondage trousers from Louis Vuitton.”

Corré went on to say the following about the state of punk: “Some people are very concerned about the price of these artifacts, but a conversation that we need to have is about values. Punk provided an opportunity for the no future generation of the 1970s to create a way out of it. Not trusting the media, not trusting the politicians. Investigating the truth for yourself. DIY. Punk was never, never meant to be nostalgic, and you can't learn how to be one at a Museum of London workshop. Punk has become another marketing tool to sell you something you don't need. The illusion of an alternative choice. Conformity in another uniform. If you want to understand the potent values of punk, confront taboos, do not tolerate hypocrisy, investigate the truth for yourself.”

Many fans and spectators—including Johnny Rotten himself—disagree with Corré's decision to burn the items, saying they should have been donated to charity instead. “If you want to sell this stuff, who’s going to actually buy it?” Corré asks. “It’ll end up on some banker’s wall.”

Watch the video below and tell us what you think in the comments.