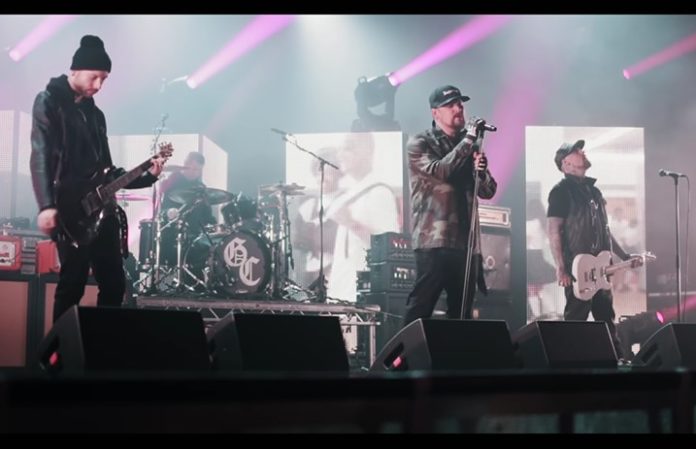 Earlier this month at Lil Peep's special fan memorial service, Good Charlotte shared a heartfelt cover of Lil Peep's “Awful Things.” In a new interview with Beats 1, Joel Madden explains how the cover came to be.

“We had just started talking to Peep’s whole team about collaborating on a tour or something, literally two weeks before he died. We were big fans,” Madden explains.

“Obviously when he passed away, we had already had a conversation started. They knew we were big fans, and he had said he was a fan of ours, so there was a lot of mutual love there.”

Because of their friendship and admiration for what Peep was doing, they knew they wanted to be a part of the memorial somehow, even though they were on tour in the U.K.

And in a span of days, they were able to put together a special tribute to Peep, covering his hit “Awful Things.”

“They asked us if we wanted to do something to participate in the memorial. We were overseas on tour in the U.K., so we put together that cover. It was kind of crazy—we put it together, recorded it, filmed it, all in a matter of two or three days,” Madden explains.

“We just wanted to do something to be a part of the memorial and show our love to Peep and his fans and his family and his friends. To be there in spirit and to be there musically. We were just really happy we could put it together in time and be a part of it. It was as special for us as anything we've ever done.”

Hear the interview below:

Lil Peep's death at the age of 21 came as a shock to the music community. Presumed an overdose, the musician's brother Oskar recently said the death was accidental: “He was super happy with where he was in life.”

Peep was part of GothBoiClique, cofounded with Wicca Phase aka Adam McIlwee, the ex-singer of Tiger’s Jaw, creating their own hip-hop/emo subgenre that has prompted a massive movement in the music industry. With over 100 million streams to-date, including tracks like “Awful Things” and “The Brightside,” he solidified his standing in the genre-defying movement.

Just this week, Lil Peep's mother shared a new music video for “Save That Shit,” taken from Peep's Come Over When You're Sober, Pt. 1. According to Peep’s representatives in the industry, new music will be released posthumously at an undisclosed date.