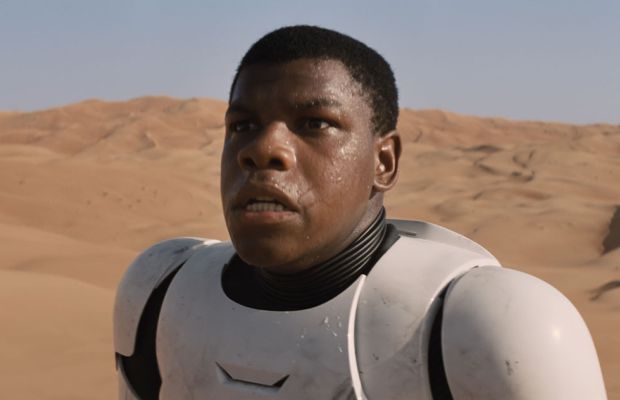 John Boyega may not be a household name just yet but with the 23-year-old Attack The Block actor set to take on the role of Finn in J.J. Abrams' Star Wars: The Force Awakens this December, Boyega will be synonymous with arguably the most beloved film franchise of all time. Not a bad gig.

As the young London native has been gaining fame as of the late, he recently sat down with GQ for a cover story interview where he talks all about his experience of joining the cast of The Force Awakens, what he thinks of his character and much more. On the process of landing the role, he explains, “I was unleashed into seven months of auditions. It was like The X Factor but without the TV show around it. It was intense.” When asked about his reaction to reading the film's script, Boyega admits, “When I read the script I cried, and I'm not really a big crier… I'm more like a frog-in-the-throat kind of guy, who'll try to hold it in and make sure I don't let it all out.”

Read more: C-3PO actor on new Star Wars: “The secrecy has been beyond ludicrous”

On his character, Finn, who was revealed in the first teaser trailer for the film, Boyega says, “Finn is dope. His story is so epic. It's a story that's never been seen before, but it also mirrors the stories of Luke Skywalker and Han Solo. And he's quirky and charismatic and funny. For me, he was the best character in the script.” And in case you were wondering what it's like to film while carrying and using a lightsaber: “They're heavy, those things, and there's a lot of running involved. I was trained on a high incline treadmill so when it came to it I could sprint around the desert in a leather jacket. They should do a Star Wars weight loss program.”

You can see Boyega in Star Wars: The Force Awakens when it hits theaters on December 18, 2015.