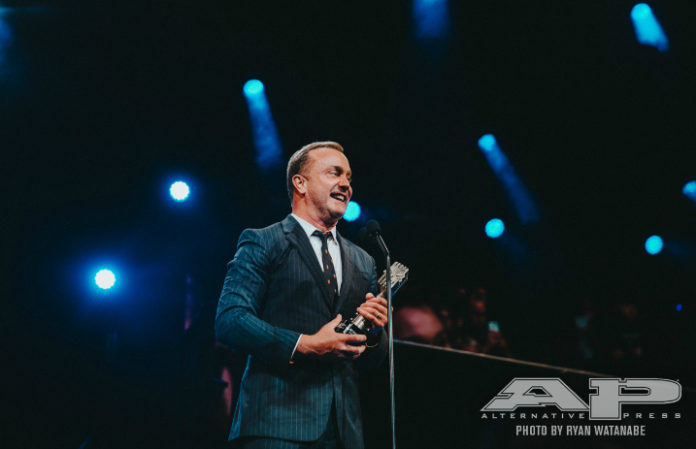 John Feldmann is essentially a rock ’n’ roll Swiss Army knife, one whose storied career is populated with multiple high points in the fields of performing, recording, producing, mixing, providing direction and co-writing with other bands. Given his myriad contributions to contemporary punk, it was only fitting that he received the inaugural Influencer Award at last night’s Alternative Press Music Awards.

Feldy was presented with an APMAs Skully by show host Andy Biersack, whose Andy Black solo LP The Shadow Side and releases by his band Black Veil Brides were overseen by the producer. After running down a quick list of crucial albums Feldy has been involved with (from BVB to Blink-182’s Grammy-nominated California), Biersack told the audience about Feldmann’s infectious enthusiasm and rapid-fire pace of working.

“Music has always been there for me,” said Feldmann who opened up about his life.

While his role as the driving force in both the alt-rock outfit Electric Love Hogs and ska-punk notables Goldfinger got him into the music business, it was his early production work two decades ago—most notably Goldfinger, ska-punk upstarts Showoff and punk hopefuls Mest—where he made industry heads swivel. His resumé is a scroll through your music library, having been involved in various capacities with artists as diverse as Blink-182 (whose California album earned both him and the band their first Grammy Award nominations); Panic! At The Disco's Vices & Virtues; both albums by 5 Seconds Of Summer; All Time Low's Future Hearts and Dirty Work; the Used and Good Charlotte, as well as acts you would never imagine, from 311 and Ashlee Simpson to Disturbed and Hilary Duff. The scope of his collaborators means one thing: Feldmann is always in service to the stuff coming out of the speakers. A true influencer, indeed.

“Music has been my life,” he told AP. “It certainly saved my life as a super-anxious and depressed and angry kid. I was so driven and passionate about writing music and touring and being in a band that there’s nothing anyone could have said to me that would have altered that.”