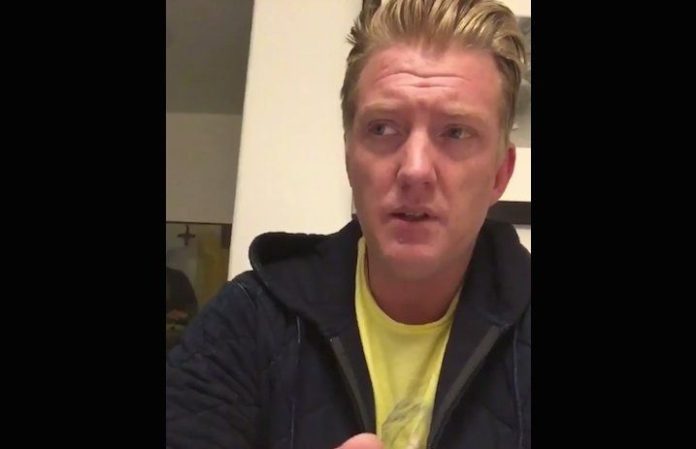 [Photo by: Queens Of The Stone Age/Instagram]

Queens Of The Stone Age frontman Josh Homme has issued a video apology after kicking a female photographer in the face during the band's concert at KROQ's Almost Acoustic Christmas on Saturday. Watch it below.

As first reported, Shutterstock photographer Chelsea Lauren told Variety that Homme violently kicked her while she was capturing the band's performance. “It was obviously very intentional,” she said. “I saw him coming over and I was shooting away. The next thing I know his foot connects with my camera and my camera connects with my face, really hard. He looked straight at me, swung his leg back pretty hard and full-blown kicked me in the face.”

Lauren posted photos and video of the unprovoked assault on Instagram, which can also be seen below. Homme was apparently acting strange throughout the concert on Saturday night—the photographer said he deliberately cut his own forehead with what appeared to be a knife just minutes after the incident. Later in the show, the QOTSA singer-guitarist reportedly called the audience “retards” and criticized that night's headlining band, Muse.

On Sunday, Homme stated that he was “very sorry” and “would never intentionally cause harm to anyone working at or attending one of our shows,” while claiming the incident derived from his “state of being lost in performance.” Now, as reported by Consequence Of Sound, the musician offers further apology, saying he doesn't “have any excuse or reason to justify what I did… I've made a lot of mistakes in my life, and last night was definitely one of them.”

In the Instagram video, Homme expresses regret, saying, “I want to be a good man, but last night I definitely failed at that. That means I failed my friends and family as well. I never want them to feel ashamed of being around me or knowing me. So I apologize also to my bandmates, my mom and dad, my wife and brother, and my kids. I'm gonna have to figure out some stuff. Rock 'n' roll is a wonderful thing, it's supposed to save and help people, not mess them up.”

The Queens Of The Stone Age leader apologizes directly to Lauren in the new video, closing the message by saying, “I understand you have to do whatever you have to do.” Watch Homme's apology video here:

Thank you everyone that has reached out with supportive messages. A small update, as I'm being flooded with questions: My neck is a sore, my eyebrow bruised and I'm a bit nauseous. The doctor released me early in the morning. Here are three images. Two of them as Josh looked at me, smiled and then kicked me. The other one is later after he cut his own face with a knife. I was in the pit in tears – and he just stared at me smiling. Assault in any form is not okay, no matter what the reasoning. Alcohol and drugs are no excuse. I was where I was allowed to be, I was not breaking any rules. I was simply trying to do my job. I hold nobody accountable for this but Josh himself. KROQ has nothing to do with this and I will always support them. The irony is someone had thrown an ice cube on to the very slick catwalk before the QOTSA set. I was afraid that one of the band members might slip and hurt themselves so, when the lights went dark, I used my arm to wipe down the runway so nobody would hurt themselves. Thank you to @variety for their immediate concern and care with this matter. As of now, nobody from QOTSA has reached out to me. #queensofthestoneage #QOTSA #JoshHomme