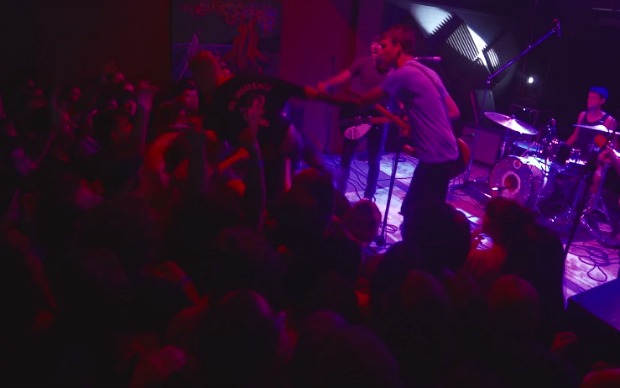 Joyce Manor took a stand against stage-diving at a recent show. In the video below, a “grown man” tries to stage dive, and frontman Barry Johnson cuts the song and pulls him back onstage. “Hey man, how tall are you?” He asks the stage-diver. “How much do you weigh, if you don't mind me asking?”

Johnson then asks a girl in the audience how much she weighs and says, “It's completely unacceptable for him to impose himself on top of you.” You can watch footage of the event below. (Skip to 1:00.)

Johnson then took to the band’s Twitter to voice his opinion:

Seeing a lot of people online saying I'm a “pussy” and a “bitch” for calling out that grown man trying to crush a group of teenage girls.

..Great way to make young women feel safe at a show when the rest of the fucking world is hostile towards them already.

Guys tweeting at me like “what about guys who get hurt at shows?” This is u pic.twitter.com/wLTi4fBuis

We’ve addressed the issues associated with stage-diving before, but let us know your thoughts.