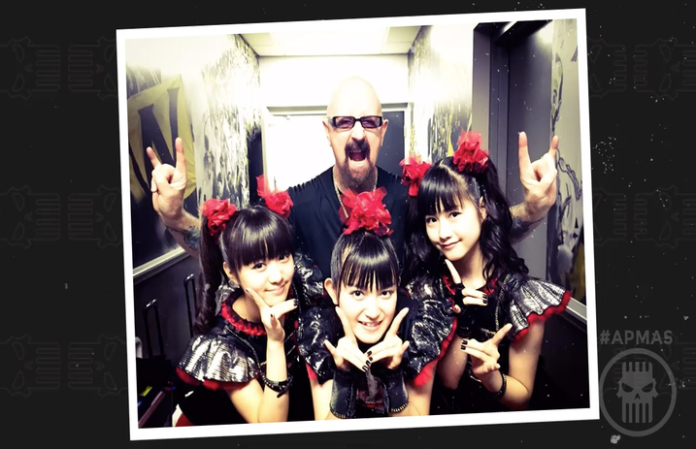 Babymetal excitedly revealed the Metal God would perform with them in a video posted on Billboard today. “Honestly, I am still at a loss of what to feel,” says Babymetal’s Su-metal about the pairing with Halford. “But to be able to perform together with the Metal God, I am in disbelief.”

Get your tickets to the APMAs now!

“It's really cool to hear and watch such a strong young Japanese metal band make solid growth in the world with such unique conviction and invite me to headbang along with them for this special appearance,” says Halford of the collaboration. “Further proof of the continuing power exchange from the roots of metal into the future metalsphere!”

Also performing at this year’s APMAs are A Day To Remember, Good Charlotte, Yellowcard, Of Mice & Men, Papa Roach, Issues, the Maine, Mayday Parade and Beartooth. More performances, guest appearances and the first round of presenters will be announced soon.

Babymetal also are nominated for Best International Band. Visit the APMAs Vans Voting Site to check out all of this year’s nominees and vote for your favorites! Voting has become an international phenomenon, with ballots coming in from over 130 countries. Also, visit our APMAs page for information on performers, honorees and presenters, tickets and VIP packages, pre-show parties, red carpet appearances and beyond.

This year’s APMAs, hosted by Alex Gaskarth and Jack Barakat of eight-time AP cover stars All Time Low, will broadcast live the evening of July 18 from the Schottenstein Center in Columbus, Ohio.

Tickets are on sale via Ticketmaster here, and an extremely limited number of VIP experience packages are still available via SoundRink. Tickets start at $49.99. SoundRink VIP packages will include limited merchandise, elite access to the red carpet, prime seating and VIP meet-and-greets.