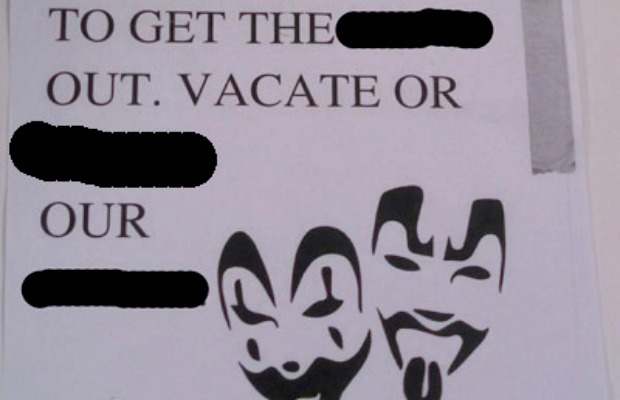 According to news channel KOIN 6, about a dozen businesses in the trendy area of North Portland are getting the same threatening note from Juggalos, telling them they have been “targeted” and to leave the neighborhood.

It looks like this is due to gentrification. Portland is one of the trendiest cities/hipster strongholds on the planet, the cost of living is rising, and this group—claiming to be Juggalos—are not happy about it.

In addition to the flyers, workers have noticed an increase in car break-ins. (“There’s broken glass everyday.”)

KOIN reports, “The issue of gentrification is once again at the forefront of one North Portland neighborhood after 14 businesses on N. Williams St. received threatening flyers claiming to be from ‘the Juggalo family,’ a subculture that subscribes to the music and culture of the hip-hop group Insane Clown Posse.”

Watch a report below: