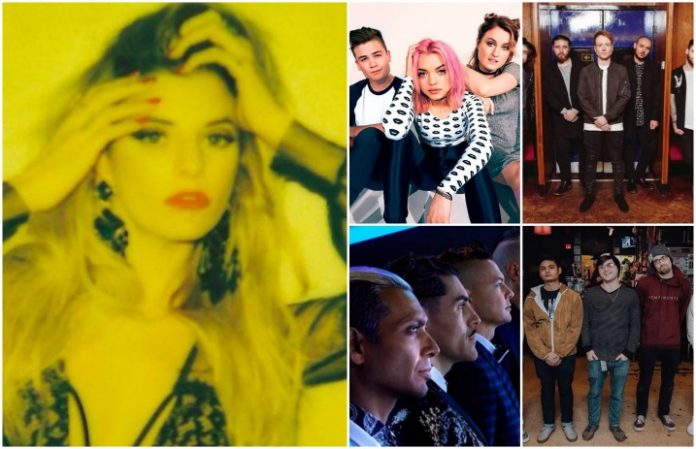 We're wrapping up this week with news from Dreamcar (AFI/No Doubt), Hey Violet and Juliet Simms. See it all below.

Read more: Bayside debuts an amazing new video, and other news you might have missed yesterday

Dreamcar, which features members of AFI and No Doubt, released some studio footage with the caption “a taste of what's to come,” and we're stoked.

According to The PRP, the band are making their live debut at Coachella later this year. The group is composed of Davey Havok and No Doubt's Tom Dumont, Tony Kanal and Adrian Young.

British band Mallory Knox have a visual to go along with their new single, “Better Off Without You.”

Here's what frontman Mikey Chapman says about the powerful video:
“For many, going to a doctor and speaking about an illness of the mind can be a difficult thing and can require great courage – to accept and admit you no longer have full control of your own thoughts and feelings. To be given a pill and told to ‘see how it goes’ or made to wait months to talk for 10 minutes to a professional is the reality many face. The quick fix mentality of society may work for some, but leaves others more isolated and desperate than ever before. We wanted to address this in our own way.”

Juliet Simms unveiled a beautiful version of her song “My Last Whiskey Tears” on the piano.

You can grab it via MerchNow here.

“My Last Whiskey Tears” comes from Juliet Simms' recent EP, From The Grave.

Skillet released a music video for “Stars,” featuring footage from the movie The Shack.

The movie's soundtrack will drop on Feb. 24 and can be pre-ordered here.

Have a listen below, and grab their AP cover here!

One of our 10 up-and-coming artists who pack an emotional punch, Hot Mulligan released a music video for their song, “Dary.”

“Dary” comes from the band's newest EP, Opportunities. Check it out below, and let us know what you think!

Watch more: Radkey, Stories Untold on how to appreciate and make a good movie