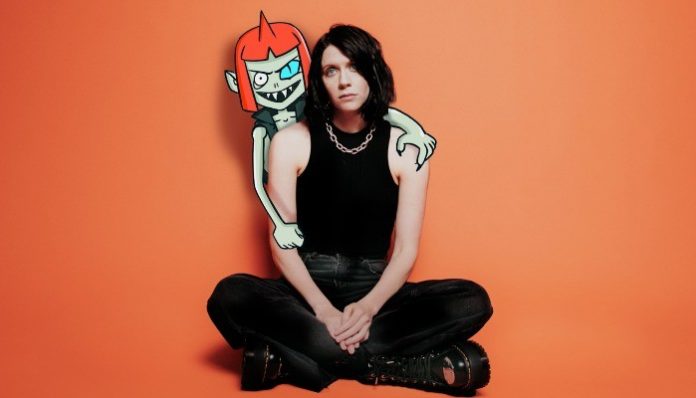 K.Flay (Kristine Flaherty) has shared the release date for her upcoming EP, Inside Voices, with a new single and music video, “Four Letter Words.” Alongside the EP, the singer also announced dates for her upcoming North American tour next year.

Flaherty’s fourth LP, Solutions, was released in 2019. Since then, she’s released a string of singles and collaborations, including “Zen” with X Ambassadors and grandson and “Hurting On Purpose” with Whethan. Now, her latest track is giving fans a first look at her forthcoming EP.

The singer surprised fans with the new track, which follows her last single “I Don’t Care Anymore” with Jax Anderson. Through a change of her Instagram bio, she began to tease fans on Twitter by saying something was happening with her account.

Inspired by real events from her life, “Four Letter Words” explores the singer’s feelings post-breakup and the ruckus it caused within her—from the initial thoughts right after it happens to the realization that she was too good for them anyway. The track was her way of releasing the frustrations that come with feeling like you have to be nice all the time.

“So many of us go through life trying to be polite, and then we reach a breaking point,” she explains. “When we were recording ‘Four Letter Words,’ it felt scary to allow myself to go there, but there was liberation in it, too.”

Known for her genre-defying style, K.Flay mixes dark guitars with upbeat rhythms to create an energetic groove. Full of indignation, the alt-pop singer tears through each verse with confidence and attitude. With intense beats providing a solid backdrop for every wave in the transition from verse to chorus, the track sets the stage for the rest of the upcoming EP.

Read more: 15 artists who would crush a collab on blink-182’s next record

The music video follows K.Flay as she battles against cartoon animations IV (the id) and OV (the superego). With each drop, she fights for control of her own mind before making amends with the two characters, ending their war with a gripping performance.

Featuring drums from Travis Barker (blink-182, Box Car Racer, Transplants) and a ripping guitar solo from Rage Against The Machine’s Tom Morello, each of the five tracks on Inside Voices takes listeners into the inner workings of the vocalist’s mind.

Also including a track co-written with Imagine Dragons singer Dan Reynolds (Good Girl), the upcoming EP is one of Flaherty’s more personal releases. Sharing her thoughts on love and double standards, she expresses some of her most vulnerable feelings with eclectic sounds and progressions.

“So often we keep everything bottled up,” Flaherty says. “Inside Voices was a way for me to exorcise some demons and safely express these uncomfortable but very human emotions I was feeling.”

“Four Letter Words” is available to watch via YouTube or below.

Inside Voices drops June 11 via BMG. Check out the dates for K.Flay’s upcoming tour below.