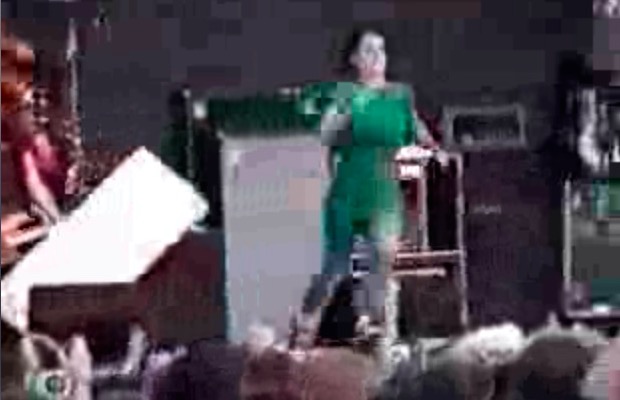 Okay, so, before Katy Perry was, well, Katy Perry, she operated as a contemporary Christian artist under her actual name, Katy Hudson. Somewhere between 2003 and 2005, she and Relient K frontman Matt Thiessen dated.

As we can see in this video, she, being a supportive girlfriend, took to the stage during Relient K’s cover of Eminem’s “Lose Yourself.” After waving a sign around, she decided diving off the stage would be fitting. After jumping, however, she probably had second thoughts, because she absolutely ate it on the way down. While we don’t get a good angle, Matt stops the song fairly quickly to see if she’s okay.

Sure, this isn't the only time Katy dove off a stage, but it's worth noting that at the beginning of her song “Self Inflicted,” she sings, “Remember when I dove into the crowd and I got a bloody knee under my skin, a mark from wiping out. It brings back the memories.” Is this the time she is referring to?

The music industry is a bizarre place.