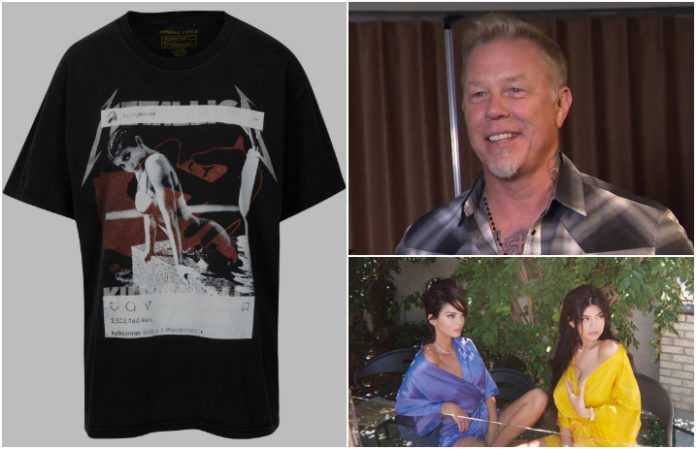 Kendall and Kylie Jenner just keep on taking heat for their misguided vintage band T-shirts that were launched earlier this month but quickly nixed. Now, Metallica's James Hetfield has spoken up about the T-shirt controversy.

Read more: Slayer's Gary Holt has some strong words about Kendall, Kylie, and the Kardashians

As previously reported by AP, the Jenner sisters issued limited edition shirts with their own images and branding superimposed over famous band logos and photos. One particularly egregious example featured a poolside Instagram shot of Kylie printed atop the Kill 'Em All art of a vintage Metallica tour tee.

In a new interview with ET Canada, Hetfield calls the Jenner sister's metal-fashion appropriation move, “disrespectful.” The musician spoke to the entertainment outlet while traveling with Metallica on their current WorldWired Tour, launched behind their recent 2016 album, Hardwired… To Self-Destruct.

“I guess what they were thinking is, 'We can do whatever we want,'” says Hetfield. “To me, it's disrespectful. We've spent 36 years working hard, doing our best to keep a really close connection with people, [to] make every note count. And someone just throws something up over something that we feel—not that it's sacred or anything, but show some respect.”

Hetfield also spoke to ET about Metallica's sustained popularity in heavy metal: The band have one of the best-selling albums of the year with Hardwired, their tenth studio album, and have now joined the top record sales ranks with the likes of Twenty One Pilots on Nielsen Music's Top 10 Rock Albums list of 2017.

“I'm pleasantly shocked and surprised that this album is getting the attention that it is,” Hetfield says of Hardwired. “We're just writing the next best thing we can write, and we're writing music that we like to hear and play. So, [do] other people feel the same way? It's bizarre to me.”