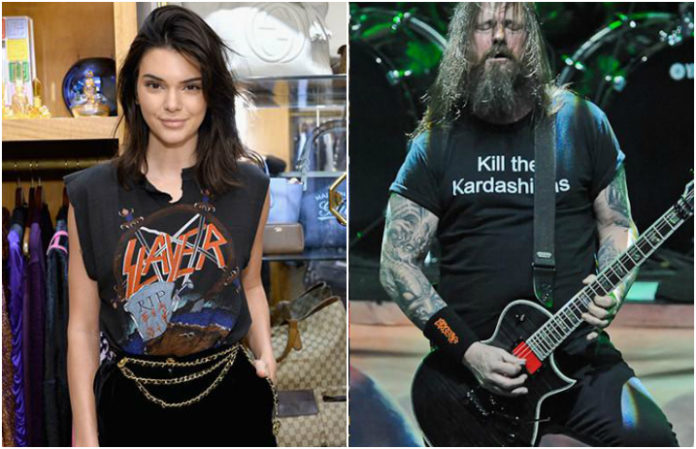 Gary Holt—the Slayer and Exodus guitarist who’s been known to rock a “Kill the Kardashians” T-shirt—is throwing down the Kardashian gauntlet after Kendall Jenner and Kylie Jenner‘s recent vintage band T-shirt gaffe. Read his candid remarks about the fashionista sisters and their famous family below.

As reported by AP, the Jenner sisters faced mad heat when they released a custom line of vintage T-shirts with their own images and branding plastered over famous band logos and photos. Some of the more glaring examples included Kendall’s visage emblazoned atop iconic images of Tupac and Jim Morrison, and a screenshot of Kylie printed on a Metallica tour tee. Following the internet outcry, the sisters removed the shirts and apologized online.

Now, Gary Holt has come forward with his no-holds-barred take on the Jenner siblings and their fellow Kardashian clan. “I hate their guts,” the metal musician told Swedish rock mag RockSverige in a new interview. (via Metal Injection)

“I don’t begrudge them for their money,” Holt says. “I just fucking hate people that are becoming superstars for doing nothing. Kim Kardashian was a closet organizer and then she did a sex tape and became famous for it.”

Holt was asked about the Jenners and Kardashians due to his frankness on the socialite celebrities, specifically the “Kill the Kardashians” T-shirt he wore during a performance with Slayer. The image was later juxtaposed with a photo of Kendall donning a vintage Slayer tee and turned into a meme sensation.

But was Holt’s “Kill the Kardashians” shirt an off-the-rack item or a completely custom job? “It was made by a friend of mine, Jack,” Holt offers. “[He] put [it] together just because he knows my deep, bitter, black hatred of them.”

Holt’s anti-Kardashians T-shirt became such a big hit that he started a small clothing business, No Love Apparel, where he sells the now-trademark “Kill the Kardashians” tee and other derisive variations. Check them out here.

Does Holt plan on expanding his apparel brand by taking on other members of the Jenner-Kardashian crew with his irreverent T-shirts? The musician says he considered doing a Caitlyn Jenner shirt but ultimately thought better of it.

“I left [Caitlyn] alone because I’m all for sexual identity freedom. … I have nothing against the trans community or gay and lesbian people. … The rest of the family and Kanye West are fodder enough. Fucking hate their guts.”

Would you prefer to wear a vintage band tee customized by Kendall and Kylie, or Holt’s “Kill The Kardashians” T-shirt? Let us know in the comments.