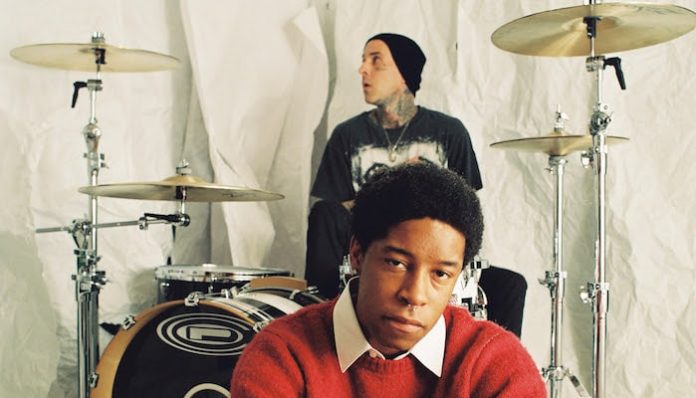 KennyHoopla is treating fans to another one of his explosive collaborations this week.

On Friday, he unveiled his latest song “ESTELLA//” with Travis Barker that is truly reminiscent of early 2000s punk rock.

Read more: We will see this new gruesome storyline play out in ‘Stranger Things 4’

KennyHoopla has gifted listeners plenty of new songs and collaborations this year. Last month, he teamed up with nothing, nowhere. and JUDGE for the action-packed video for “blood.” As well, he recently joined forces with The Neighbourhood‘s Jesse Rutherford and grandson for two renditions of “lost cause//.”

Now, after weeks of anticipation, he has dropped his new collab with Travis Barker “ESTELLA//.” Last month, KennyHoopla confirmed he was in the studio with the blink-182 drummer working on a new project.

Now, the wait for the collab is finally over. KennyHoopla is known for his genre-bending tendencies and we see just that in “ESTELLA//.” The new song features hard-hitting percussion and rock-infused vocals, making it the ultimate throwback to the early 2000s punk rock genre.

Barker, who is a big fan of KennyHoopla, first reached out to him over Instagram. From there, the duo began writing together and soon created “ESTELLA//” in Los Angeles. Both KennyHoopla and Barker star in the collab’s upcoming video which arrives next week.

“ESTELLA//” is the latest of many new collaborations from Barker. He recently produced and helped create Machine Gun Kelly‘s No.1 album Tickets To My Downfall. The blink-182 member can be seen rocking out in MGK and Halsey‘s tumultuous video for “forget me too.”

As well, just last week, Barker confirmed that he is back in the studio with Machine Gun Kelly working on even more new music. Jxdn has also been involved in the duo’s recent studio collaborations.

Barker is also set to narrate alongside MGK in the upcoming MOD SUN co-directed musical based on Tickets To My Downfall. Earlier this week, Machine Gun Kelly finally confirmed when the highly-anticipated film is arriving.

Stream KennyHoopla and Travis Barker’s new collab “ESTELLA//” below and watch out for the video sometime next week.