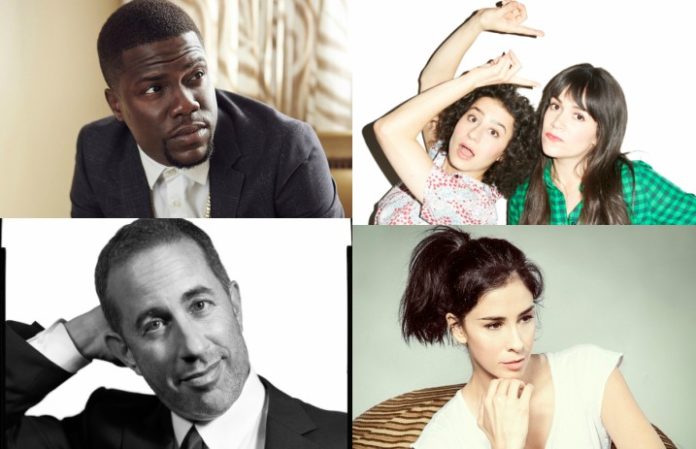 The creators of the Bonnaroo and Outside Lands music festivals have teamed up with Comedy Central to create the biggest comedy and music mashup of the year.

The Colassal Clusterfest calls itself “the ultimate experience for comedy fanatics and pop culture junkies,” boasting TONS of huge names in comedy and some pretty cool bands too. The festival will be held over three days in San Francisco from June 2-4 at the city's Civic Center Plaze and Bill Graham Civic Auditorium.

Read More: ‘Futurama’ is getting a mobile game

At the top of the bill stand a bunch of familiar faces like the great Jerry Seinfeld, current superstar Kevin Hart, and the always outspoken Sarah Silverman. Other popular acts that will be cool to see perform in this unique setting include Broad City, Fred Armisen, Hannibal Buress, Bill Burr, and Reggie Watts.

The festival will also have multiple attractions based on comedy favorites like South Park, It's Always Sunny In Philadelphia, and of course, Seinfeld.

Musical artists featured in the lineup may be outnumbered, but they're no slouches.

Ice Cube finds his name furthest up, but other acts like Tegan And Sarah, Vince Staples, Maya Rudolph's band Princess, and Ty Segall also will be performing. Check out the full festival lineup.

You can also watch the official announcement video below, which happens to be pretty funny itself.

Tickets and VIP for Colassal Clusterfest have an early bird presale going on now, and general tickets will go on sale beginning tomorrow, March 2. You can find more on that information here.

This festival is sure to be on the most hilarious weekends of the year. Will you be attending? Let us know what you think of the all-star lineup in the comments.

Watch More: APTV RECAP: 8123 Festival ft. THE MAINE, A ROCKET TO THE MOON, THE SUMMER SET, and more