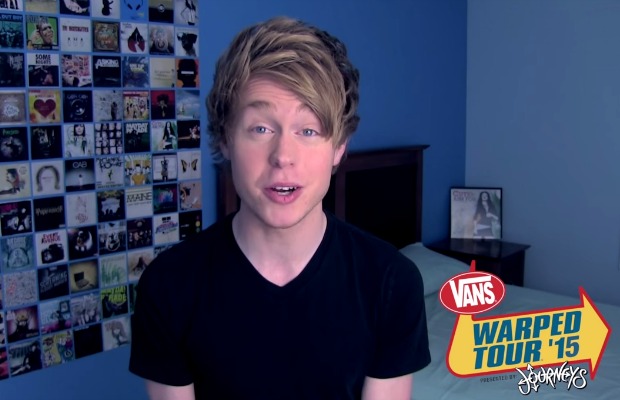 Scandals of a sexual nature have taken an uncomfortable spotlight in our music scene as of late. There were the disturbing accusations against Jake Mcelfresh a.k.a. Front Porch Step earlier this year. Prior to that, a member of Pure Noise emo band No Good News was accused online of sexual assault.

Most recently, Austin Jones, a musician and official Warped Tour YouTuber, has been accused of something that can only be described as odd. “YouTuber Austin Jones has been accused of lying about his age to get underage girls to send him twerking videos because they make him happy,’” reads a story on music blog PupFresh.com. In the video below, one girl accuses Jones of similar behavior when she was 15 and he was allegedly “22 or 23.”

Festivalgoers have never had problem sharing their emotions and grievances with Warped Tour founder Kevin Lyman on Twitter—and this case is no exception. After being bombarded with tweets about Jones, Lyman said that he was removing all YouTubers from the tour. He has since retracted that statement and is going about things more rationally.

Lyman is investigating all of the YouTubers’ backgrounds and alleged transgressions before making a decision regarding their participation on this year’s tour. “The word ‘pedophile’ is a strong, strong term,” Lyman tells AltPress. “While the world can be screwed-up at times, there is a criteria for things. In the court of the internet, people’s lives are being dragged out in front of the world with no due process. People throw very strong words out onto the internet and when it is old news to them, it leaves a trail of destruction in other people’s lives. This country was built on the concept of ‘innocent until proven guilty.’ Are we going to go back to this Salem witch hunt mentality? Communication needs to happen. I am actively encouraging that If women and girls feel they are being victimized, tell your parents, go to the police, talk to counselors.”

When asked if he felt this stance would jeopardize attendance at this year’s tour, Lyman responds, “If you’re not going to go to Warped Tour because of some perceived mob-mentality injustice, you should maybe volunteer at a non-profit that day.”