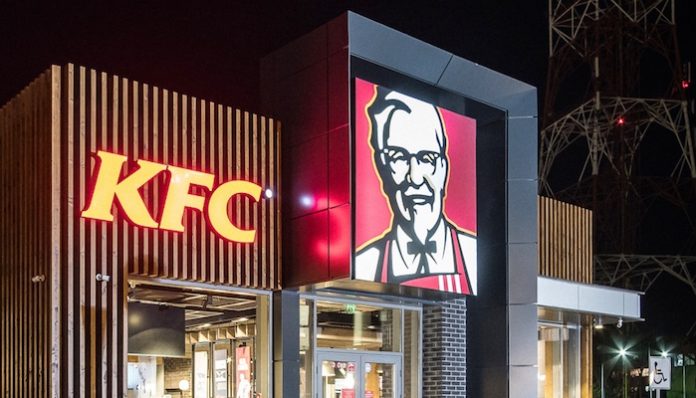 This year’s Ultra Music Festival in Miami has been drawing some very mixed reactions from both performers and festival-goers. Night one of what a lot are now referring to as #FyreFestival2 kicked off on Friday and included a DJ set that left a lot of people scratching their head.

The EDM festival has featured some incredible acts such as Major Lazer, the Chainsmokers, Avicii and more. This year, one brand decided to make a play for a coveted performer spot.

Fast-food giant KFC bought a DJ slot for Colonel Sanders on Friday night on the Ultra main stage and no, we’re not making this up.

According to Billboard, a real DJ wearing a helmet with the Colonel’s face performed a rather awkward set on the festival’s opening night.

The promotional stunt resulted in a mixed reaction from those who attended, including Marshmello who shared his disapproval in a since-deleted tweet.

“This @kfc colonel sanders Djing at @ultra is lame. I can think of a lot of other artists that actually deserve to be on that stage instead.”

And he wasn’t the only one to express his displeasure in the KFC set:

The biggest mistake KFC made was to not have the Colonel wearing a bucket on his head.

This is god damn hilarious on so many levels. I don’t care… I love it. https://t.co/okgQGGC3FO

The KFC set is not the only reason Ultra has found themselves in hot water. Attendees have taken to social media to dub it #FyreFestival2 after night one resulted in a “meltdown”.

Ultra reportedly had 200 buses ready to take more than 50,000 concert-goers from the island of Virginia Key to Miami. Fans had the option to either take the provided transportation or walk almost three miles back to the mainland in order to find alternate transportation.

Unorganized lines quickly formed for the buses while attendees took to social media to share the staff’s inability to direct people.

And that wasn’t all that happened:

.@ultra you have 30k people doing a 5k walk back to mainland. This has to be sorted for tomorrow! #fyrefestival2 #fail pic.twitter.com/xHu8YI4quf

Just wanted to share my experience tonight and explain why I won’t be attending day two of Ultra. I’m sure many other people were sadly in similar situations. Completely unacceptable to make people WALK home after transportation was promised. #FyreFestival2 #ultra2019 @ultra pic.twitter.com/CZWXzy5cr7

It was a semi thought out logistical nightmare. Four main stages squeezed into one tiny area while four tech house stages were spread out a min 30 minute walk away. And thats before a fire and tens of thousands of ppl walked miles over highway bridge after total shuttle breakdown

2+ hrs of waiting for buses to pass by us either full or empty. I might not come back the second day even though i already paid for the ticket. Nobody on charge no barriers no nothing. Wow for my first #Ultra not looking at going next year #Ultra2019 #FyreFestival2 #shitshow pic.twitter.com/eIFjjSh0lG

Where’s Andy King when you need him?

Would you have watched a performance from Colonel Sanders? Sound off in the comments below!