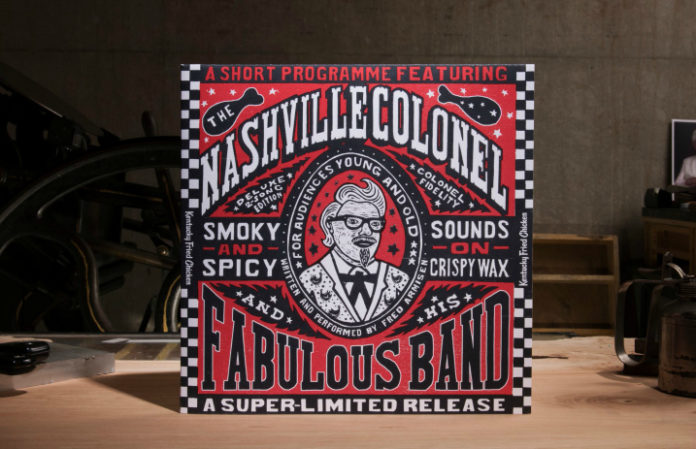 Funny man Fred Armisen has written and recorded an EP of songs all about KFC’s newest menu item, Nashville hot chicken—because why the heck not.

Find out where you can pick it up on vinyl below! (via Consequence Of Sound)

KFC made the announcement, saying that the super rare vinyls are hidden in record stores across America, from California to New Jersey. For a full list of cities and stores, check out their map here.

Unsurprisingly, I made a record. Well, Fred Armisen made it. You know what I mean. Check it out: https://t.co/Nwx2E6gx2l pic.twitter.com/yj2KeHL2ij

Want to hear Fred Armisen achingly sing facts from the internet about Nashville on a Colonel record? You’re in luck. https://t.co/Ht6zItr0Ha pic.twitter.com/CyeCsNdCBc

According to Consequence Of Sound, only 125 copies of the EP were pressed to vinyl, making it a very limited edition for anyone who's hoping to get their hands on a copy.

The EP is also available for streaming on SoundCloud, with “C-O-L-O-N-E-L” and “Nashville Centric Boogie” clearly vying to be the last big hits of 2016… Or something like that. Check out the site to read more on the project!

Just days ago, KFC New Zealand announced that they’d be selling a KFC chicken-smelling candle, a scent we never knew we wanted to sniff until now—just because we’re curious.

What better way to light up your nights than with a limited edition KFC Scented Candle! Keen? To go in the draw to #win one just suggest another piece of KFC merchandise you'd like to see from us in the comments below! Winners drawn Monday! #KFCAdventCalendar

Will you be trying to snag a copy of these rocking KFC tunes on vinyl? Let us know in the comments!