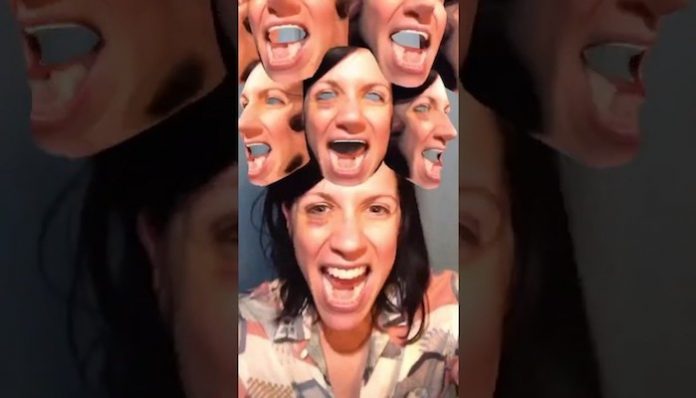 K.Flay dropped her third studio album, Solutions, in July of this year on Interscope Records.

The singer/rapper began gaining traction with the release of her debut album, Life as a Dog in 2014. It reached No. 2 on Billboard’s Heatseekers Albums chart and No. 14 on Billboard’s Rap chart.

Read more: The Ghost Inside announce London return as only 2020 UK show

Yesterday, K.Flay released the new music video for her single “This Baby Don’t Cry.” While on tour in Europe this past month, she created the music video herself using only Instagram filters.

“I made this video on my iPhone after I broke my nose on tour in Paris,” K.Flay says. “I figured I’d get creative instead of depressed. :)) All the footage was filmed in green rooms and venues and hotels on tour across Copenhagen, Stockholm, Hamburg, and Leipzig.”

The video shows the ever-present joking side to K. Flay, dancing and singing her way through one filter after another. Check out the video below.

Earlier this year, K.Flay released a trilogy of music videos for other singles from Solutions.

The trilogy actually starts with the final installment of the three that she released, which is for the song “Not In California.”  This video sees the artist laying and living in trash and various items throughout.

She released it the same day the United Nations Climate Action Summit began in New York City, taking her own personal stance on the political issue at hand.

Read more: K.Flay is over climate change inaction in ‘Not In California’ video

The first video released was “Bad Vibes” which is part two in the trilogy with “Sister” wrapping it up as part three. You can check out both of those music videos below.

You can listen to Solutions here and catch K.Flay on tour this fall. Check out the dates below and purchase tickets here.

Which is your favorite music video from K.Flay’s new album? Lets us know in the comments below!