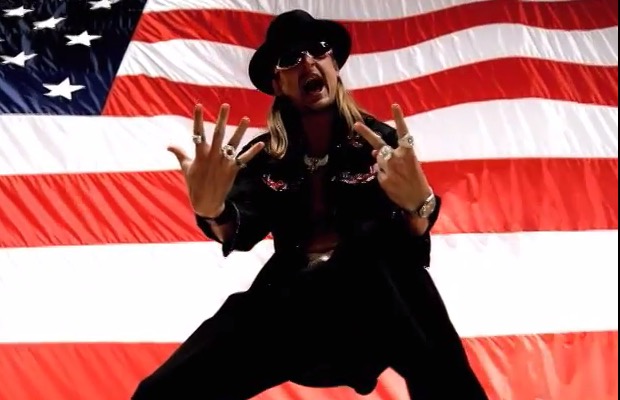 According to The Hill, Kid Rock may actually have a chance at a Senate seat. We reported in July that Kid Rock had announced his plans to run, but the rock star still needs a Senate bid in order to run.

The news source says that Republicans are thinking Kid Rock may be “the party's best shot to win next year's race against Sen. Debbie Stabenow,” the site reports.

Read more: Kid Rock has message for Confederate flag protestors: “Kiss my a**”

In recent polls, Kid Rock has come close to the democratic incumbent's numbers and sources say he would likely win the primaries if he entered the race.

Steven Law, a close ally of Mitch McConnell, said “We'd be actually very interested in his candidacy. There was a poll that came out that showed him 8 points behind the incumbent, Debbie Stabenow. That's not a bad place to start out.”

Mike DuHaime, a GOP strategist, says “The reality of politics is there's never enough money to do what you want, and the one thing you need money for is name identification. Celebrity gets you attention, but you have to turn that into votes. Donald Trump could do that, but it remains to be seen whether others can.”

However, legal limitations may require Kid Rock to use his legal name, Robet Ritchie, on the ticket, which would hurt his chances.

While the Repulican party seems optimistic of Kid Rock's chances in the race, many do not think he'll get that far. Some are skeptical that he will recieve a bid, others suspect that he'll turn down a bid even if he gets it.

Katie Packer Beeson, a former deputy campaign manager for Mitt Romney said,”I just don't think he is all that interested in sitting down and having to understand all of that stuff.” Beeson continues, “When you actually get down to the brass tacks of what the job of a U.S. senator is, does Bobby Ritchie want to be in D.C. every Monday through Thursday, working in the Capitol casting votes?”

While the possibility of Kid Rock having a political career is still tenuous, he does have an official website where you can buy t-shirts to support his campaign and his non-profit organization for the promotion of voter registration. You can also read his official comments, like “One thing is for sure though…The democrats are 'shattin’ in their pantaloons' right now…and rightfully so!” and “if I decide to throw my hat in the ring for US Senate, believe me… it’s game on mthrfkers.”

Do you think Kid Rock will actually run for Senate? Or do you think celebrities ought to stop running for political office and leave it to the professionals? Sound off in the comments below!