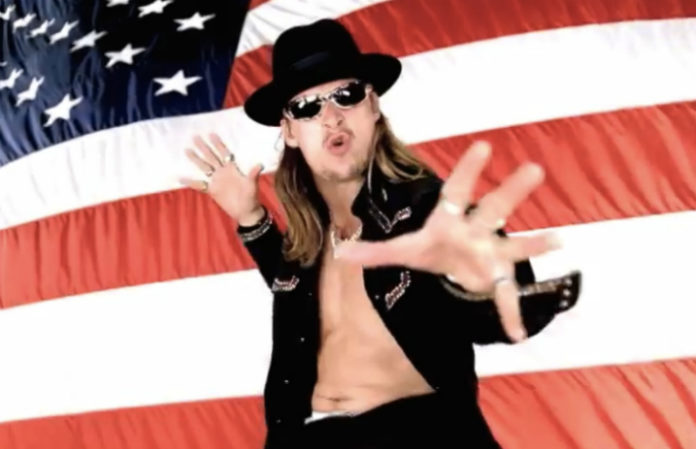 Is Kid Rock running for the U.S. Senate? Apparently, yes.

On Wednesday, the self-professed “American Bad Ass” launched a website, kidrockforsenate.com, promoting his supposed bid to be a U.S. Senator representing his home state of Michigan. The internet promptly lit up about the site, with many outlets assuming it to be fake (or simply a marketing stunt). Could the Kid actually be wanting to govern?

Well, it looks like this may be the real deal. Kid Rock, who promotes himself as “Pimp of the Nation” on the Kid Rock '18 website, tweeted the following response: “I have had a ton of emails and texts asking me if this website is real… The answer is an absolute YES.” See his tweet below.

I have had a ton of emails and texts asking me if this website is real… https://t.co/RRVgISDFeq The answer is an absolute YES. pic.twitter.com/uYCUg6mjW1

The site also asks, “Are You Scared?” To which, it would seem, that answer could also be an absolute yes. Other Kid Rock for Senate tag lines peppering the campaign site are: “I'll Rock the Party,” “In Rock We Trust,” “Born Free,” “Party to the People,” “Welcome to the Party”, “You Never Met a Politician Quite Like Me,” and “Get in the Senate and Try to Help Someone.” (via Entertainment Weekly)

Some reporters are questioning the legitimacy of Kid Rock's campaign claim (see Emily Heil's tweet, below), saying that it doesn't look like Rock has properly filed associated paperwork with the FEC. Regardless, Rock apparently maintains that his run for Senate ain't no joke. (via Fox News)

Kid Rock visited Donald Trump at the White House this spring, appearing in a widely-covered photo with the president, fellow musician Ted Nugent and former Alaska Gov. Sarah Palin. Will he now rock the Senate in 2018?