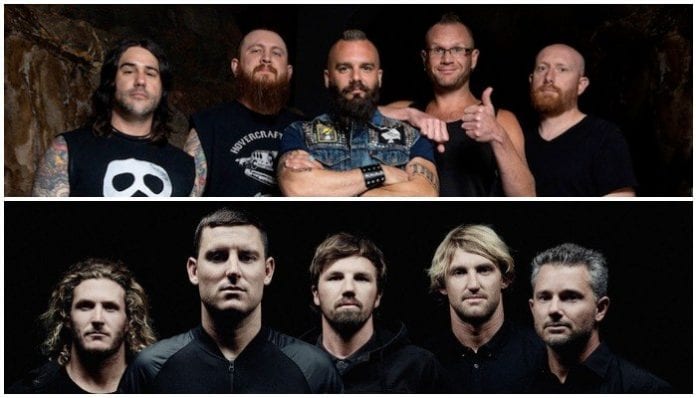 Killswitch Engage and Parkway Drive made our day by announcing a massive co-headlining run deemed the Collapse The World tour earlier this week.

At the time of the first announcement, the two bands revealed After The Burial would be opening, but now another act has joined the roster.

Read more: What are Poppy and Marilyn Manson up to?

Killswitch Engage took to Twitter today to state tickets are now on sale. However, they also unleashed the news that Vein would be joining the lineup, which kicks off in April.

Last weekend, Killswitch Engage and Parkway Drive sparked rumors of a co-headlining tour as they were both announced for the Sunday date of So What!? Music Festival in Houston in April. They were also announced for UFest in Phoenix also in April, as the PRP points out, further fueling the rumors.

Once it was confirmed the rumors were indeed true, Killswitch frontman Jesse Leach expanded on the excitement:

“After having the pleasure of destroying stages all over Australia with the Parkway guys just over a month ago, we couldn’t be more stoked to share the stage with them once again, this time in the States. Parkway Drive puts on an incredible live show, and we are excited to combine forces and bring the energy every night to a town near you. I am absolutely certain fans of both bands are in for a hell of a time. This will be one for the memories for sure—let’s rage!”

Parkway frontman Winston McCall is also stoked for the tour, sharing his excitement to share the stage with Killswitch:

“This co-headlining tour with Killswitch Engage is a landmark for Parkway Drive in North America. Having smashed our way across the land for over a decade now, it is a humbling and defining moment to be sharing this slot with true heavy metal icons and personal heroes. We have always aimed to maintain the highest standard of energy, connection and entertainment at our shows, a standard that has been set and maintained by KSE their entire career. The concept of how epic this tour will be is mind blowing to me. Bring on the insanity!”

The co-headlining tour tickets are on sale now. UFest and So What!? tickets are also available now. Check out the full list of dates below.