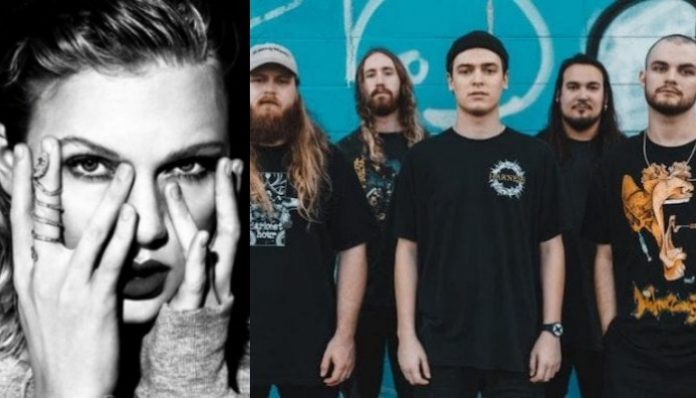 Knocked Loose are gearing up to drop their next album A Different Shade of Blue on Aug. 23.

As announced today, that just so happens to be the same day pop giant Taylor Swift will release her next album, Lover.

Knocked Loose vocalist Bryan Garris took notice of this, and had some words for the pop star.

Garris then clarified it was a joke, and promoted his album.

The band’s label, Pure Noise Records, poked fun at him a bit.

Wait until her second week or we drop

There were definitely some Swifties in the replies who were not happy with the tweet, but we think the entire thing is hilarious. We’re all just waiting on that response from Swift to see if she’s up for the challenge.

The band previously unveiled the lead single from the album, a cathartic new jam titled “…And Still I Wander South.”

Recorded by producer Will Putney, Knocked Loose recorded 12 anger-filled tracks and created what Garris believes to be some of his most intensely personal lyrics to date.

Garris explains that the album’s lead single “is about wanting to move on, or better yourself for whatever reason, but you keep going back to the same old thing. Whether that be depression or whatever you may be going through. You always wander back to the same mindset.”

Check out the official music video for “…And Still I Wander South” below!

Knocked Loose have a massive amount of pre-order bundles to choose from, you can check those out here.

You can view the full tracklist below.

The band are currently on tour with A Day To Remember and Boston Manor. You can check out all the dates below.

A Day To Remember Dates:

What do you think of Knocked Loose challenging Taylor Swift? Sound off in the comments below!