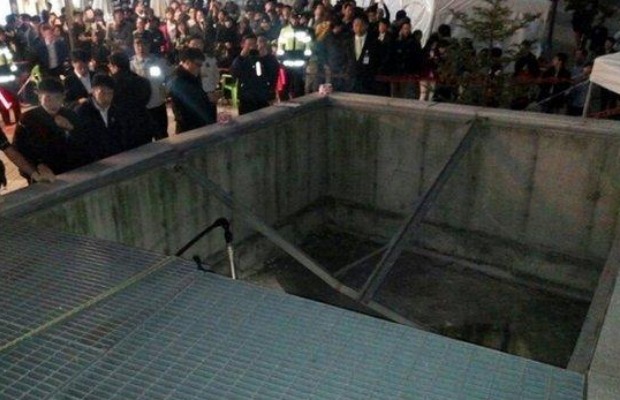 According CNN, a South Korean safety official has committed suicide following the tragedy that left 16 people dead at a K-pop concert.

According to the Associated Press, the 16 people who died fell 65 feet down a shaft when a ventilation grate (pictured), which they were standing on, collapsed into a parking garage. 11 others were seriously injured.

CNN Reports: “On Saturday, the body of the 37-year-old safety official was found on a street near his office, Yonhap news agency reported, citing police. They think he jumped to his death.”

The man was responsible for safety measures at the concert and had recently been interrogated by police for the incident. He wrote in note, “I am sorry for the dead victims. Please take good care of my children.”

The official had also left a message on his Faceook page: “I apologize to the victims. I'm sorry to my family.”

Around 700 people had gathered for the concert to watch popular girls’ group 4Minute. The AP reported, “The band [continued] to dance for a while in front of a crowd that appeared to be unaware of the accident.”

After the incident, 4Minute’s label released a statement, saying, “We can't express how regretful they are for what happened. The performance wasn't solely a 4Minute show, but a stage shared by many artists for an event. During their performance, none of the members or staff were aware of the accident and finished their complete set. It wasn't until they arrived back in Seoul that they heard of the news regarding the accident. We hope the audience wasn't hurt in this accident.”